Before he made gelato, Matteo Pochintesta was an architect. It shows in the fit-out of his Newtown shop MaPo, where his clever use of inexpensive plywood and steel makes the space look sleek and contemporary.

Pochintesta’s gelato flavours have only a handful of ingredients, and when I comment that each one tastes exactly like what it’s meant to be, he smiles proudly. The pistachio, made from imported Sicilian nuts, is nutty, mildly sweet and creamy (yet vegan). His nectarine gelato tastes like biting into the stone fruit at the peak of the season.

“We try to make gelato simply, using raw, organic ingredients,” says Pochintesta. “We try not to mess up with the flavours too much.”

Pochintesta learned from the best. Tired of working in an office in Sydney and Melbourne, he moved back to Italy in 2016 to work at Ciacco in Milan under Stefano Guizzetti. “Stefano is one of the top 10 gelato makers in Italy and he taught me everything I know,” he says.

He returned to Australia, and over a year planned his venture. He work in Melbourne briefly at gelato store Pidapipo, before moving back to Sydney. He knew the city had a lot of excellent gelato but Pochintesta thought it lacked a traditional Italian gelataria. “This kind of gelato is really different from what people are used to,” he says. “Generally in Australia, people do a mix of different ingredients together but I wanted to go back to the way we’re used to in Italy.”

The most quintessential Italian flavour is fior di latte (“milk flower”). It’s a gently sweet, creamy gelato made with organic milk from Queensland’s Barambah Organics. “This is a must in Italy. Everywhere you go, you find a fior di latte,” he explains.

Considering his dedication to fresh, organic ingredients, it’s not surprising he’s also carefully considered the packaging of his gelato. Each cup, spoon and straw is compostable and he’s working on finding a supplier for compostable containers to replace the takeaway boxes. “We do composting on-site and we try to be as plastics-free as possible,” he says.

Although the fit-out is modern, MaPo has one visual throwback to traditional Italian gelato-making: the goods are stored in lidded steel pots called pozzetti, which maintain the gelato at minus 11 to minus 12 degrees Celsius.

“It protects it from humidity and light and it’s how you keep the quality of the ice-cream as best as possible. Customers can’t see the gelato, which is a little bit of a problem sometimes, but it’s about having the best quality product we could.” 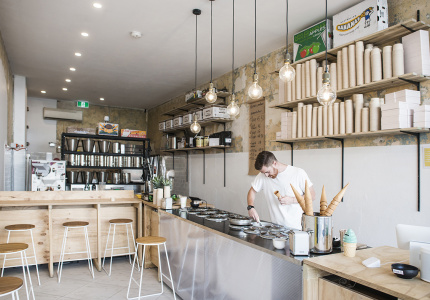