You need to change your dinner plans. 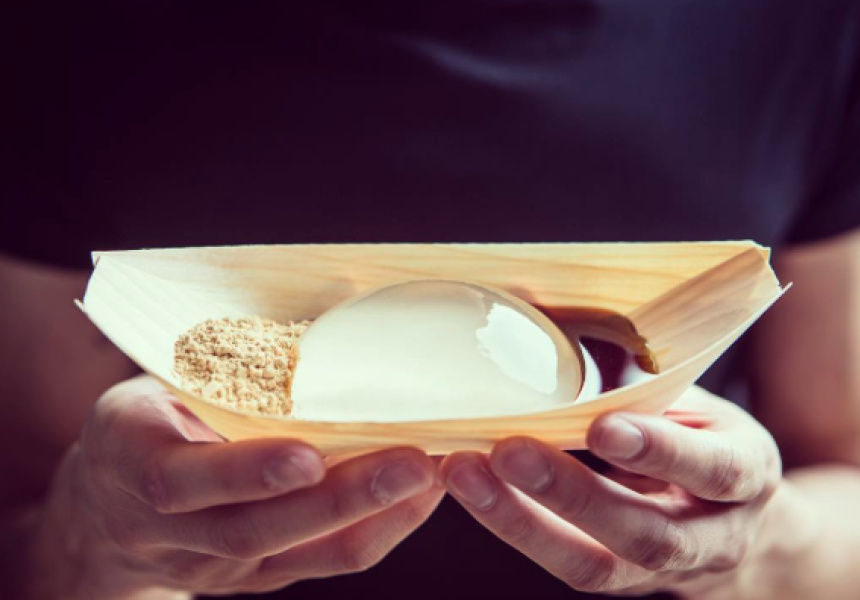 The raindrop cake is now available in Australia. Since making its New York debut on April 2, chef Darren Wong’s crystalline creation – which looks more like a neat, watery blob than an actual cake – has been trending endlessly on social media. Hundreds have reportedly lined up each Saturday at Brooklyn’s Smorgasburg outdoor food markets to try it for themselves.

The delicate, 150-millilitre blob of agar jelly – which Wong pairs with sugar syrup and soy flour – has to be eaten quickly before it melts.

Now, Harajuku Gyoza in Potts Point has leapt on the concept, becoming the first restaurant in Australia to serve the dessert. “We introduced it straight away [after spotting the trend late last week],” general manager Andrew Jeffreys says. “It was all hands on deck – we wanted to get it before anyone else did.”

Jeffreys says it took a day of frantic testing on Saturday before the team in Brisbane finally settled on a consistency it was happy with.

Harakuju Gyoza has taken a different tack with the dessert’s flavours, though. It adds sugar to the ball and serves it with kuromitsu (brown sugar syrup) and kinako (roasted soy flour) mixed with sesame powder. An alternative variant is flavoured with strawberries and blueberries inside the cake, and is served with condensed milk, kinako and crushed peanuts. “Everyone who has had it loves it,” Jeffreys says. “Although a lot of people prefer the berry version.”

The vegan friendly dessert with a consistency similar to gelatine originated in Yamanashi Prefecture in Japan, Kinseiken Seika Company beginning production of a version it calls Mizu Shingen Mochi in 2013. “The company producing it has been around for 400 years,” Jeffreys says.

And beyond that, agar jelly has long been used for desserts throughout Asia. Malaysians reading this will likely wonder what all the fuss is about; agar jelly cups are very popular across the country’s different cultures. They are served as dessert at parties and festive events. "We were all laughing [about the Wong raindrop cake]. It's very cheap," says Peter Pek, a Malaysian brand strategist currently based in London. "Some people consider it lazy dessert - if you have to make a dessert and you're lazy, then agar-agar is what you make."