New York’s Employees Only Is Now Open in Sydney

With a very Sydney cocktail called Down Payment, a kitchen open until 2.30am and chicken soup for everyone still left in the bar at 3am. 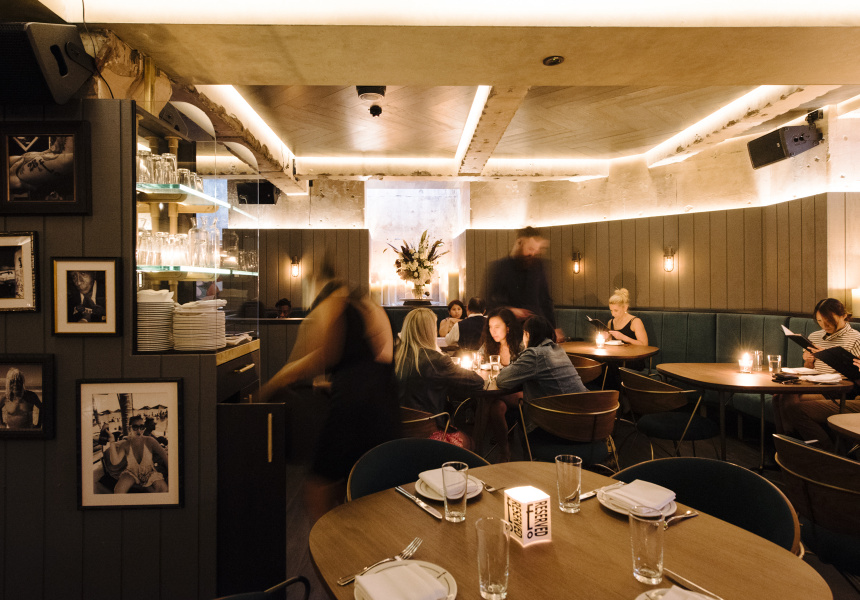 Like ordering a pastrami sandwich at Katz’s Deli and visiting the Guggenheim, sipping a cocktail at Employees Only in the West Village is one of those seminal New York experiences.

The bar, which opened in 2004 with an unassuming door and a notoriously misleading “Psychic” neon sign, was a pioneer of the city’s reinvented cocktail scene, forging the mixologist-filled path that PDT, Death & Co. and other Manhattan institutions would follow.

Now Sydneysiders in a New York state of mind can get their hit of innovative cocktails, French bistro-style meals and Prohibition-era atmosphere at the Sydney outpost of Employees Only; its first in Australia and sixth around the globe (there are bars in LA, Singapore and London).

Co-founder Dushan Zaric (who has flown to Sydney for the launch) says that although Employees Only Sydney will continue the brand’s “members-only-venue-without membership-fees” vibe, the experience has been carefully customised for its new city.

“We are not coming here with New York arrogance and doing the same thing we do there and trying to convince you to like that, we’re adapting the essence of Employees Only into something we know Sydney will like,” he tells Broadsheet. “The energy, the quality of product, the level of service and the attention to detail will be the same because that’s what people associate us with, but they will be presented in a different setting, in a design and layout that’s more appropriate for Sydney.”

It’s located in a heritage-listed basement space on Barrack Street, just near George Street and Martin Place, which Zaric says is “perfect because it’s hidden and it will always feel the same, day or night, no matter the season. Plus, we can turn up the music.” You can find the door by looking out for the "psychic" neon sign. Enter, and you're presented with a majestic scene – a beautiful staircase lined with hand-painted gold and black murals. At the bottom, behind a curtain, is the psychic in person, a women telling people's fortunes to whoever wants to listen.

The dark timber and brass highlights of Tim Leveson’s interior design (The Sandwich Shop, Pane e Cipolla) are spiked with illumination from skylights around the room’s edges.

“The energy of the room is charged with sexy and comfortable feelings,” Zaric says. “We’re not super formal – quite the opposite – but the quality of the furnishings and attention to detail make it feel the most upmarket of any Employees Only.”

The Sydney drinks list features many Employees Only staples, including its take on the classic Manhattan (with Knob Creek Rye, Italian vermouth, Grand Marnier and bitters), and the Ginger Smash (muddled ginger and mango, Havana Club 3, Velvet Falernum, fresh lime and a maraschino cherry).

“They are good, timeless cocktails that work well,” says Zaric. “That being said, everywhere we open we find something market-appropriate to add to the menu.”

Leading the charge of localised content is the cheekily named Down Payment, which blends Barsol Pisco, fresh lime, Strega, Suze (both herbal liqueurs) and, yes really, avocado (get it?).

If deconstructed guacamole in your drink isn’t sustenance enough, choose something from one of the two menus: a full list of dinner items and an all-night snacks list, available 11pm to 2.30am. They are punctuated by the venue’s signature French-via-New York fare.

“The food menu will also feature signature dishes from the past 14 or 15 years: steak tartare, bone marrow, lamb chops … We have two French chefs working in the kitchen, and they have come up with some very special stuff that is appropriate for Sydney.”

Local additions include a squid-ink risotto studded with Hawkesbury calamari and topped with lemon pangrattato (breadcrumbs), and a chargrilled rib eye with watercress and horseradish.

Employees Only’s trademark “staff meal” is on offer too (a daily special served to staff and then extended to patrons), as is the nightly chicken soup, offered just before the 3am close to everyone left in the bar.

Those looking for a more indulgent experience can opt for the full caviar service, with a choice of roe (smoked salmon, oscietra or white sturgeon) accompanied by chive crème fraiche and blinis.

Although he believes the Employees Only brand is a strong fit for Sydney, Zaric says the relationship will be symbiotic. “Sydney is such an amazing, progressive city that being a part of its very evolved bar scene is very good for our brand too.

“And you’ll see me quite often. I might even try and get some time behind the bar. If I can get my RSA.”

Employees Only
9a Barrack Street, Sydney

This article first appeared on Broadsheet on November 26, 2018. Menu items may have changed since publication.