With a New Team, a Complete Refurb and a Terrace Bar, Balmoral Bathers’ Pavilion Has Reopened

The heritage-listed waterfront venue is a more elevated, polished version of its past self. 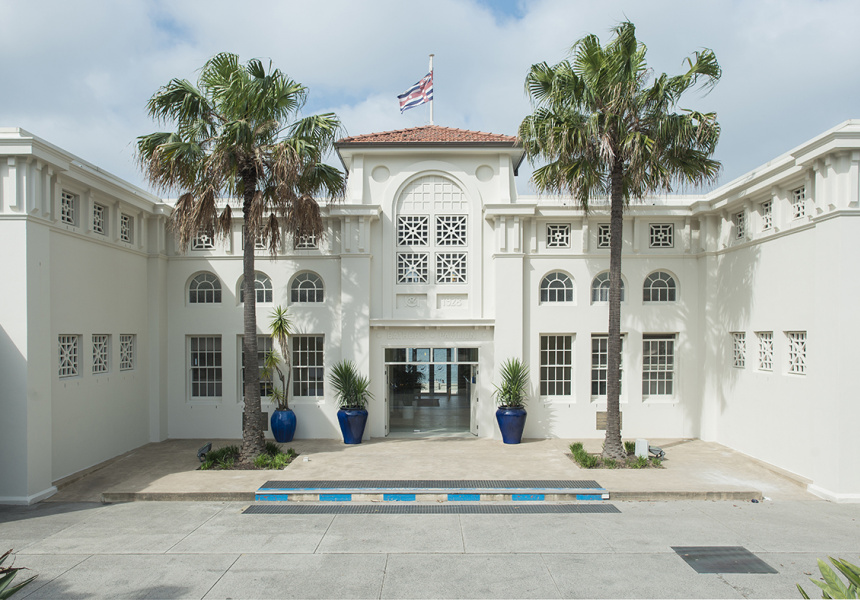 If the walls at Balmoral Bathers’ Pavilion could talk, they’d have some stories to tell. The grand Mediterranean-style building was constructed in the 1920s in response to the rising popularity of beach culture (and a bit of new wealth). Its opulence and legacy was recognised with a heritage listing in 1999, shortly after French-Canadian chef Serge Dansereau came on board to lead the pavilion into a new era of seaside fine-dining.

An almost century-long tenure on the shores of Balmoral beach has rightfully earned the venue icon status. “It’s such an integral part of the fabric of the city and, on a micro level, of Mosman,” Cam Fairbairn, general manager of service, tells Broadsheet.

Refurbishing an institution offers great rewards, but with that comes great responsibility. Interior design firm Luchetti Krelle (G & Tea, Bopp and Tone, Banksii) has modernised the establishment, honouring the bones and heritage of the space while giving the building greater flexibility.

“The beauty of it is that there’s so many pockets and parts within the venue that you can keep discovering,” says Fairbairn. “Everything from the marble to the finishes, to the artwork on the walls, it’s all carefully considered. There’s integrity behind the project.”

There’s an opulent onyx bar at the centre, with cosy booths and a lounge area. Two dining areas sit on either side of the building: fine dining at the restaurant, and a casual-yet-refined bistro. For special occasions, the chef’s table experience seats 12 and serves a menu created by Dansereau, who will also walk diners through each part of the experience. There’s also a private dining room in a luxurious wing of the building surrounded by art, with the ocean just outside the window.

The first-floor Louis Roederer Terrace (previously reserved for functions) with its million-dollar view has been transformed into a chic champagne bar, now open to the public. It’s the perfect place to spend an afternoon drinking spritzes and champagne and eating oysters.

The food throughout is French-leaning, with a coastal ethos. The bistro menu includes classics such as pepper steak, fish’n’chips, pizza and linguine with vongole. In the restaurant, expect two and three-course seafood-heavy set menus (there's no à la carte). There's also a degustation option and vegetarian set menus.

“Sometimes it’s nice to have two or three courses and not share stuff,” Fairbain says. “But if you do want to share, you can and that’s great – the option is there.”

The beverage menu includes cocktails (including spritzes, Margaritas and sours) and an extensive range of new and old-world wines – “from baller to approachable,” says Fairbairn.

There’s a lot to like at the new Bathers’, and it’s not all fancy. Perhaps you’re on the beach and can’t bear to leave? Pop into the kiosk to grab a juice, coffee (there’s a house blend from Molinari), a bite to eat or some reading material to round out your beach day. The kiosk also sells gourmet picnic hampers, towels and fancy ice blocks. Take your snacks to the Sunroom next door if you’re looking for a shady, casual spot to eat. (Footwear optional.)

There are few things more quintessentially Sydney than settling in for a day on the water, and there are few places quite like Bathers’ Pavilion to do it. 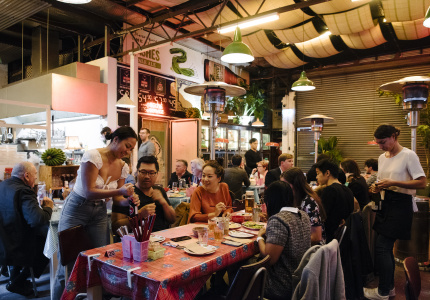