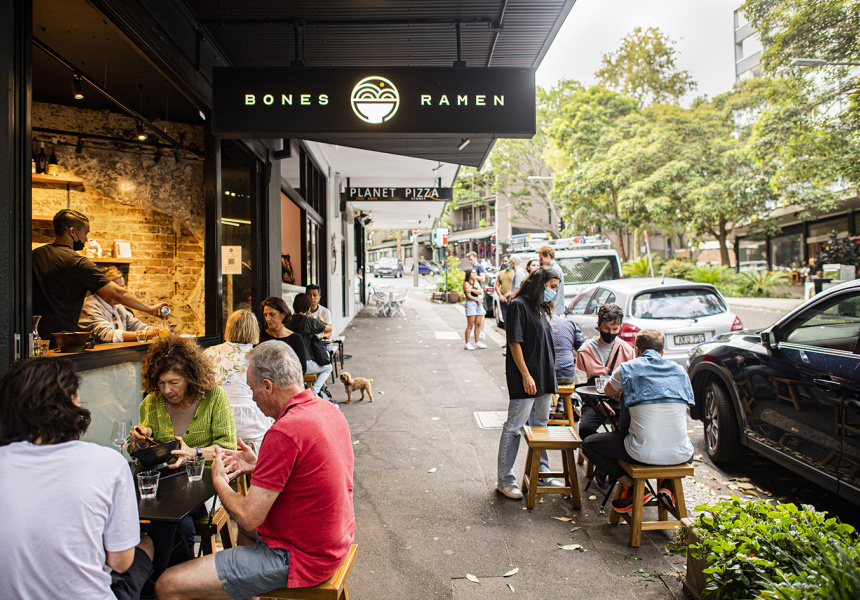 Bones is a tiny new Ruschcutters Bay ramen joint from Jake Riwaka (a Rising Sun alumnus) and Mike Mu Sung (who are, respectively, executive chef and owner of Kings Cross neighbourhood diner Farmhouse and adjoining cafe Jeremy & Sons). The pair had been cooking up the idea for a standalone ramen joint from as early as February last year. Zip forward to the beginning of lockdown in June, and they’d turned Farmhouse into a takeaway ramen pop-up, regularly selling out of 50-odd serves of a different soup every weekend for 12 weeks straight. By July, the pair had already signed a lease right across the street from the restaurant, in a space that had stood empty for six months.

“It was really run down,” Mu Sung tells Broadsheet. “We literally had to gut it.”

Guru Projects (Mille Vini, Casa Merida, Ezra) was engaged for the initial design, with Mu Sung, Riwaka and a team of builders carrying out much of the fit-out themselves. The result is a rustic and contemporary space, with exposed red-brick walls offset by blue tiling and a warm timber bar overlooking the cosy kitchen. It’s a petite, walk-ins-only kind of place, fitting 10 diners inside and 10 on the footpath outside.

Bones’ extensive pop-up range has been whittled down to four ramens, with rotating specials thrown in the mix. The hero is a Tokyo-style shoyu ramen, topped with pork chashu, a gooey soy egg, watercress and menma (fermented bamboo shoots). Noodles (brought in from a wholesaler in Lane Cove) bathe in a light broth made from pork bones and ribs, ham hocks, chicken feet and kombu, simmered gently overnight to extract a nuanced flavour. The house tare is added for a jolt of complexity.

“We bought a couple of small oak barrels, and we’ve done a three-soy mix with some stock, sugar and mirin in there. And we’ve been ageing them since lockdown. That’ll be the seasoning for all our shoyu-based ramens. We’ll see how it goes – it could be shit,” says Riwaka, laughing.

The gut-busting option is a chicken-based tori paitan (thick chicken broth) ramen, with an unctuous broth made from chicken feet, rooster and laying-hen carcasses, kombu and aromatics – boiled “fast and hard” for up to 18 hours – garnished with chicken chashu, egg, shallots and menma.

“It’s very collagen-heavy, very fatty,” says Riwaka. “You know when you have a tonkotsu and you get fat bits on top? Ours has extra chicken fat.”

There’s also a delicate seafood-based niboshi soup starring three to four varieties of fish, katsuobushi (bonito flakes) and kombu, topped with a juicy prawn ball and scallop silks. And for the veggie crowd, there’s an umami-packed soup spiked with a red-and-white miso tare and finished with Jerusalem artichokes, roast tomato, shiitake and oyster mushrooms, and hunks of celeriac “chashu” standing in for blow-torched pork.

While Farmhouse deals in classic French and Australian wines, Bones is skewing towards new-wave producers.

“You get more funkiness and volatility, and we’re keen to see how that mashes with the ramen instead of a typical oak chardonnay. We’ll order six of everything, and when that runs out we’ll change to something else,” says Mu Sung. And instead of the usual Japanese suspects of Asahi or Sapporo, the house lager is Reschs, backed up by curious seasonal brews by Victorian brewery Sailor’s Grave. There are plans to do kegged beers and sake down the track.

Mu Sung says Bones won’t be making an appearance on the major delivery platforms, though you can still drop in for takeaway. “We have such a small spot, we don’t have capacity to run out huge quantities. We really want it to be a dining experience.”

An earlier version of this article included mention of a choice between curly and straight noodles – the noodle type at Bones is dependent on the type of ramen. The article was updated to reflect this on January 27, 2022. 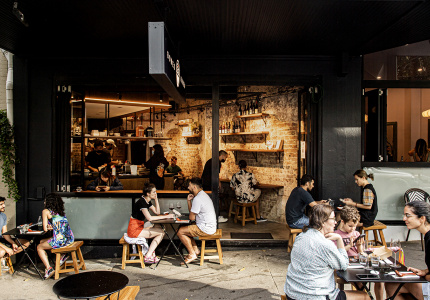