Dig into spanakopita-inspired dumplings and chargrilled octopus with carob glaze in the handsome heritage-listed sandstone dining room. Or snag a seat outside for cocktails with one of the country’s most iconic views. Thanks to generations of Greek migration there are plenty of eateries in Sydney doing exceptional Greek food. And over the last 30 years, leading Greek-Australian chef and restaurateur Peter Conistis’s Cosmos, Eleni’s, Alpha and Omega have been some of the best. But the focus on South Aegean cuisine at his new restaurant – Ploos, at Campbell’s Stores in The Rocks – is something new.

“I have so much passion and respect for regional Greek cuisine,” he tells Broadsheet. “I’m not from Crete or Cyprus, but I want to showcase what the food is about, and let people know there’s more to Greek food than your classic slow-roasted lamb.”

Conistis has approached the new menu with characteristic creativity and playfulness. He says none of the dishes are strictly “authentic” Cretan or Greek-Cypriot, but they take inspiration from ingredients and cooking techniques unique to Greece’s South Aegean and Mediterranean islands, and Cyprus.

“A lot of our dishes are inspired by both Crete and Cyprus at the same time,” he says. “For example the chargrilled octopus with carob glaze. The carob tree grows throughout Cyprus, and it gives this molasses, rich, nutty, sharp flavour to the octopus. It’s served on a bed of bottarga taramasalata, pickled cucumber and fresh caper leaf shoots.”

The horiatiki salad, a summery mix of tomatoes, cucumbers, red onions and feta, has been adapted to reflect the fact that, historically, feta was hard to come by on the islands.

“We use sea-urchin roe and pickled samphire to give the umami that would come from feta.”

The flavours of the manti (dumplings) are based on spanakopita. “We serve them with yoghurt and filo crumble, so you get that crunch, and a burnt goat’s milk butter called staka that we make here. You bite into the dumplings and you get all the flavours of spanakopita, but it’s not.”

Cocktails are served from an elegant, dark-green marble bar inside the sandstone heritage space, as well as an outdoor bar. They draw on the same inspirations and flavours Conistis uses on the food menu. There’s a sumac-and-cardamom-infused vodka with brandy muddled with sour cherries; and a walnut Martini made with metrios (sweet Greek coffee).

Australian and old world drops are well represented on the wine list. “We haven’t gone for what you can find in any bottle shop,” says Conistis.

Like neighbouring eateries in the Campbell’s Stores – including 6Head, Bay Nine Omakase and Harbourfront Seafood – the heritage space’s fit-out required a light touch. Teak, leather and a central light fixture of square natural linen, representing “ploos” (sails in Greek), result in a room that’s luxurious and inviting. The place to be at Ploos, though, is outdoors, enjoying Sydney’s most iconic view.

“We’re the only space in Campbell’s Stores that has an outside cocktail bar. You can come have a drink, some meze and watch the sunset,” says Conistis. “Right now I’m standing outside, looking out to the water. On my right is the Opera House and on my left is the Harbour Bridge. To have this backdrop, and this opportunity to do something new, I’m just thrilled.” 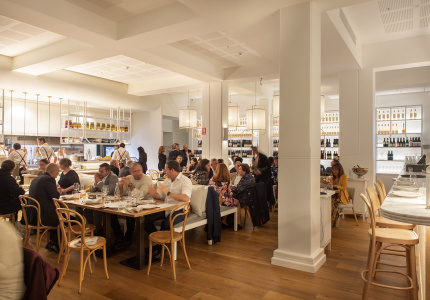