Visit for mezcal imported from Indigenous communities in Mexico and dishes from the Yucatan Peninsula – including cricket-laced guacamole, potato gratin with guajillo chillies, and octopus tacos. 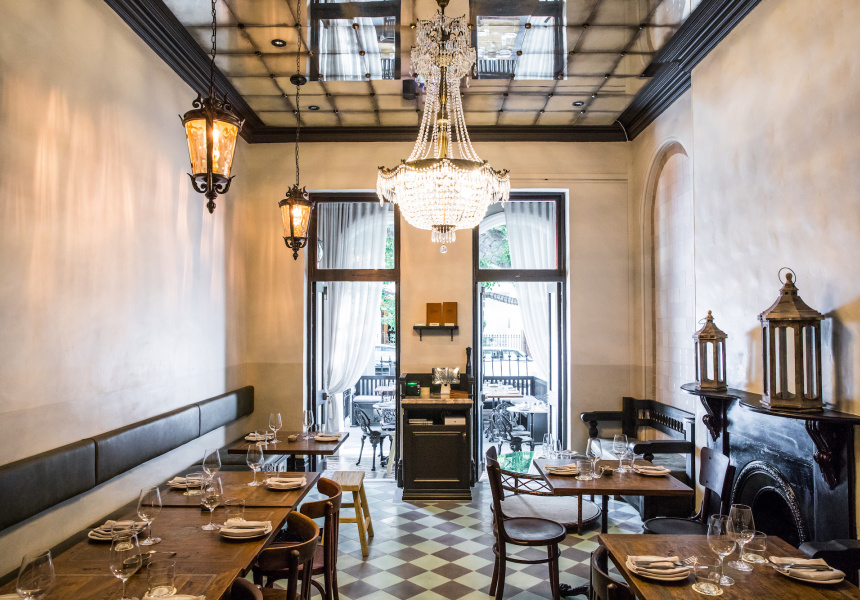 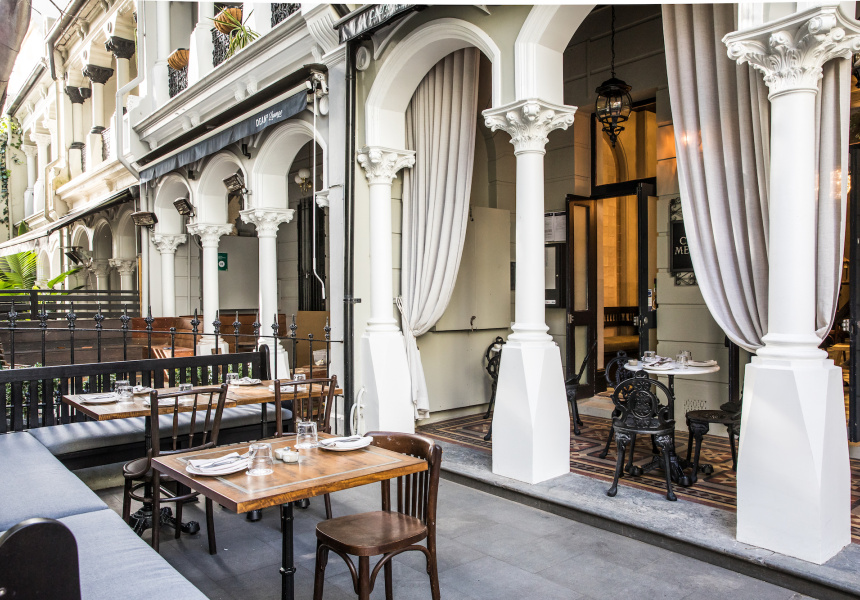 Merida, the capital of the Mexican state of Yucatan, was once one of the wealthiest cities in the world. It was said that, at the turn of the 20th century, the city had more millionaires living there than anywhere else on earth.

“The architecture was inspired by European cities like Paris,” Pablo Galindo Vargas, co-owner of Potts Point diner Casa Merida, which opened on Kellett Street last week, tells Broadsheet. “If you go there now you can see this amazing combination of European-style mansions on wide avenues surrounded by palm trees and jungle.”

The Mayan-inspired eatery is the latest venue from Milpa Collective, which also operates other Mexican diners Calita, Carbon, Taqiza and Sonora.

“The beautiful arches on Kellet Street reminded us of the architecture of Merida,” says Vargas, who was inspired by a trip to the famous boutique hotel Coqui Coqui Merida.

The 70-seat restaurant’s interiors were a collaboration between Frankly Interior Design and Gemma Chapman of Guru Projects. It’s a grand space, with greenery referencing the jungle in the city it’s named for, and elegant drapery, arches, a distressed mirrored ceiling, and an oversized chandelier in the dining room.

“We want it to feel like someone’s really fancy casa in the middle of Merida,” says co-owner Liber Osorio. And it does. It feels like a place you might spend a lot of money to travel to in order to behave, well, a little bit badly.

Which brings us to the drinks. Osorio spent a lot of time in lockdown getting to know his wine. “He basically became a wine nerd,” Vargas says. He has put together a voluminous drinks menu. There’s even an entire hand-illustrated book dedicated to the rare mezcals the team are importing from Indigenous communities in Oaxaca. They are arranged according to “mood” – and the illustrations for the Mezcals of Sensuality section are a doozy. The cocktail list is inspired by the tropical produce of the region. A theatrical choice is the Black Magic: a Margarita made with elderflower and activated charcoal that arrives under a smoke-filled bubble.

With the opening of Casa Merida, Osorio and Vargas are hopeful that they can continue exposing Sydneysiders to food from the distinctive regions of Mexico – each of their venues represents a different part of the country.

“Mexican food is very diverse,” Vargas says. “There has been a big evolution from when I first came to Australia and worked as a chef in a Mexican restaurant. It was all Tex-Mex – American Mexican food. We want to be more specialised. Instead of saying, ‘Hey I’m going to eat Mexican tonight’, you might say ‘I’m going to eat Mayan cuisine, or Oaxacan food’.”

The menu was created by executive chef Manuel Diaz and head chef Jiordano Bilcahlo. It’s inspired by flavours and methods exclusive to the Yucatan Peninsula, but dishes are executed with European flair. There’s a potato gratin made with guajillo chillies, and a guacamole served with pumpkin seeds and chapulines (roasted crickets). You don’t have to have crickets with your guac but we highly recommend you do – they’re smaller than you might imagine, and crunchy, too.

Infladitas – thick tortillas made of organic heirloom corn that puffs out like a balloon –are served alongside cochinita pibil, a pork dish traditionally cooked underground, but at Casa Merida is recreated by cooking the meat in banana leaves, and serving it under a smoke-filled cloche. Naranja agria, a sour orange (like a Seville orange) used in marinade, is present across the menu, its distinct flavour anchoring many of the dishes. Market fish ceviche is served with the diner’s take on leche de tigre – here, a sour orange and mango marinade. And there are four tacos: grilled steak, Mayan octopus, grilled chicken, and a vegan option with pibil marinade.

“Mexico is a rich tapestry of unique cities, flavours, people and experiences,” says Vargas. “We want to honour that by representing a different part of Mexico in each of our venues.”

The next opening for the ambitious duo will be Oaxacan-focused Circular Quay eatery Santa Catarina, slated to open in late November.