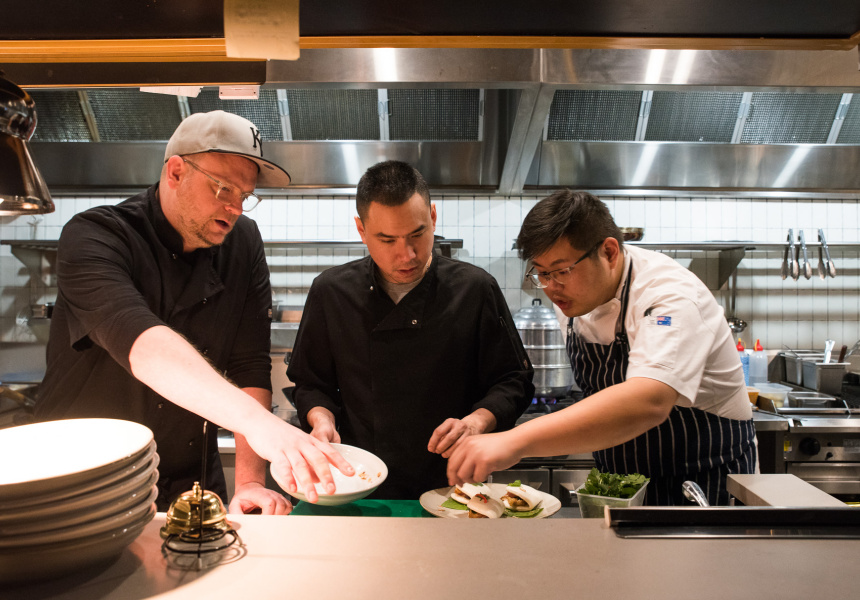 For some chefs, accidentally driving a docket spike through your finger during your restaurant’s first dinner service might be considered a bad omen. Not so for Em Meechai, head chef of modern Asian eatery Chubby Cheeks in Paddington. “I just patched it up and moved on. There was no bleeding, luckily,” he told Broadsheet.

Meechai’s ability to stay calm in the midst of chaos has been honed over years working in busy Sydney kitchens, including a decade at Vietnamese restaurant Red Lantern, with five of those years as its head chef (Red Lantern is Mark Jensen and cookbook author and TV chef Luke Nguyen’s).

It’s an impressive rise for a man who, 12 years ago, arrived in Australia to study English and worked part-time as a kitchen hand. Despite having never picked up a knife in his native Thailand, Meechai found he had a knack for the chef’s life. “I like feeling the rhythm of the kitchen … I can feel calm and controlled; I feel like myself,” he says.

But a chef needs to feel challenged, too. When he was approached by Mona Vale’s Armchair Collective’s Lyn and Songpol Manoonpong to run their to-be-opened restaurant in Paddington, Meechai leapt at the opportunity to work on a new menu from scratch.

Meechai, the Mannoonpongs and executive chef David Claesson (ex-Glass Brasserie) did three months of research, development and tastings. Their brief was to create “contemporary Thai” food. Thanks to Meechai’s experience with a variety of Asian cuisines, and Claesson’s time in high-end kitchens, the final menu draws from Thailand, China and Vietnam, and is created with modern cooking techniques.

Under “cheeky bites”, you’ll find snacks such as seared scallops in betel leaf, roasted duck with house-made squid-ink rice crackers, and prawn and sweet potato fritters. The fritters are inspired by goong tod, a Thai street dish of deep-fried school prawns that Meechai ate as an after-school snack. Back then, in his hometown Ranong in southern Thailand, you could get a bag of five to 10 prawns for 20 cents. At Chubby Cheeks you get three fritters of crisp tiger prawns and finely julienned sweet potato for $18.

Further down the menu there’s a salad of tea-smoked duck with super-fresh herbs – Meechai sources the banana blossom, perilla and coriander from a farm in Cabramatta. And battered gurnard (an ugly white fish seldom seen on Sydney menus) coated with crunchy green rice flakes and served with a pleasantly sour green-apple salad.

On the meatier end of the menu, the Wagyu brisket takes four days to prepare; it’s brined, marinated then smoked for 12 hours. Meechai and Claesson were inspired by American barbeque culture for the dry-rub marinade, but incorporate Thai flavours such as coriander seeds, five spice and brown sugar. The dish went through eight different versions and tweaks before its final iteration.

But it’s the twice-cooked master-stock chicken that Meechai favours. Here, the whole chicken is boiled in a stock of cassia bark, star anise, white pepper, coriander seeds and roots before being deep-fried and served with a satay sauce. Meechai maintains the satay sauce is different to the earthy, turmeric-laced Malaysian satay that Sydney diners may be used to. “Thai satay sauce [has] massaman and red curry pastes mixed together with tamarind water. You get [a] sweet and sour kick, with stronger spice [coming through],” he says.

Like Armchair Collective, which is a cafe and lifestyle store, most of the decor at Chubby Cheeks is available to buy. The venue is named after the owners’ daughter’s round facial features and is in a former Max Brenner cafe. For a city with so many puntastic Thai restaurants, Paddington is notable for its lack of Thai and Asian restaurants (there’s only one Thai joint, at the Five Ways junction). Chubby Cheeks has only been open for a week, but on a Wednesday night there’s already a constant stream of walk-in diners. Docket-spike injuries or not, for Meechai and the team, this is a good omen.