A New Line-Up of Plant-Based “Meats” Has Hit Sydney, and Broadsheet Is Here to Try Them

Verdict on the scientifically built burger and hotdog? They're a remarkable feat of meat-free wizardry. Photography: Courtesy of Lord of the Fries
1/9 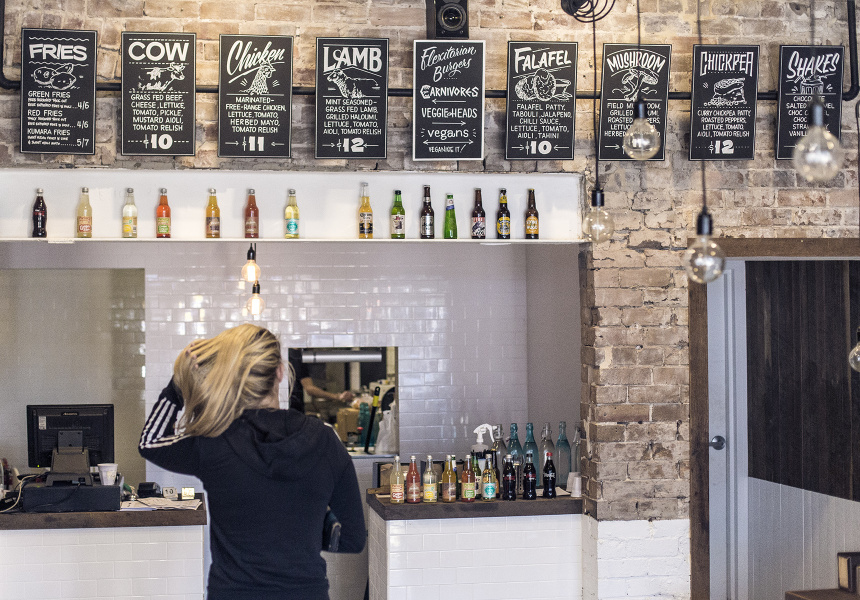 In a partnership with Beyond Meat, one of the high-profile American companies creating convincing meat substitutes, Sydney’s Soul Burger (which now has four outlets, in Newtown, Parramatta, Glebe and the original in Randwick) has exclusive Australian rights (for a limited time) to the Beyond Burger 2.0. It joins Carls Jr in the US and A&W in Canada as one of only three outlets in the world to have early access to this new burger patty.

The improved blend of pea, brown rice and mung bean proteins mixed with coconut oil and beetroot is purported to effectively replicate the flavour, texture and appearance of beef even more than its predecessor, which gained early notoriety for “bleeding” beetroot juice when cooked to medium-rare.

Meanwhile, vegan chain Lord of the Fries has debuted the new Beyond Meat sausage – an optional, up-charged replacement to their standard vegan hotdog, at all their Australian stores. Like Soul Burger – which was the city’s first entirely plant-based burger joint – it’s managed to nab exclusive Australian rights to the protein.

The announcements come at what feels like a tipping point for plant-based meats in Australia. An increased awareness of environmental and animal rights issues has seen a rapid upturn in vegan food sales in Australia, with a 2016 Roy Morgan study finding that between 2012 and 2016 the number of Australian adults whose diet is all or almost all vegetarian has risen from 1.7 million people (or 9.7 per cent of the population) to almost 2.1 million (11.2 per cent). The shift was most striking in NSW, where there has been a 30 per cent growth.

While vegan food options are becoming increasingly plentiful in Australia (a 2018 report by Euromonitor International valued the Australian vegan packaged food market at $136 million, behind only the United States and Germany), reducing the amount of meat in our diets can be a tough transition for those who love burgers and hotdogs.

Soul Burger founder Amit Tewari says “alternative meats” (a term meat producers are rallying to have changed) like the Beyond Burger and the Impossible Burger – a start-up that raised more than US$500 million in funding from backers including Bill Gates, but is not yet available in Australia – are an effective way of combatting climate change, given the destruction animal protein production causes to the environment. For example, a 2018 study by GRAIN and the Institute for Agriculture and Trade Policy found “the world's biggest meat and dairy companies could surpass Exxon, Shell and BP as the world's biggest climate polluters within the next few decades.”

“What excites me is how ridiculously good they’re [mock meats] getting,” says Tewari as we sit down together to try the first delivery of the Beyond Burger 2.0, hot off the grill. “Given humans have eaten animal protein for hundreds of years, it’s a reasonable hypothesis to say we will never stop eating meat.

“What Impossible, Beyond and every other plant-based protein company is doing is broadening the definition of meat. They’re attempting to satisfy customers who love the taste of meat, but want to eat a healthier, more sustainable option.”

We both take a bite of our burger, built simply on whole-wheat buns with vegan mayonnaise, tomato, lettuce and red onion. The Beyond patty is paler than the version 1.0, the beetroot “blood” seemingly removed. Its flavour is richer in umami and its structure more robust.

While it lacks the same level of juiciness medium-rare meat (and the more scientifically built Impossible Burger) has, it’s a convincing and satisfying substitute. Our burgers are gone quickly.

Over at Lord of the Fries (LOTF), only hours later, I have a hotdog in my hand. Another Beyond Meat product, this new meatless sausage is being offered as an optional up-sell (for an additional $4), replacing the vegan chain’s existing hotdog.

“Beyond Sausage has received a lot of praise from overseas for being packed full of flavour,” Lord of the Fries co-founder Mark Koronczyk tells me. “We’ve developed a great relationship with Beyond Meat and wanted to keep the partnership going, so we are thrilled to be the exclusive restaurant partner to bring Beyond Sausage to Australia.”

I opt for the Chicago-style hotdog, my personal favourite in the LOTF line-up, with tomato, mustard, pickles, onion and relish (a combo I’m so enamoured with, I served it at my own food stall last year).

In texture, colour and flavour, the sausage is a remarkable feat of meat-free wizardry, capturing the same slightly overwhelming porkiness a traditional pork hotdog confronts you with. While the skin of the sausage is slightly more resistant to my bite than I’d like, the Beyond hotdog is as convincing to my eyes, nose and mouth as the 2.0 burger was.

“People now, more than ever, care about what they’re eating, where their food is sourced and the impact that it has on the planet,” Koronczyk says. “It’s no longer a ‘trend’ to live a plant-based lifestyle, as more of these innovative products become widely available, people will be more inclined to make plant-based swaps for products that taste just like conventional meat, with less of an environmental impact.”

As a concerned carnivore, with as deep an affection for the planet as I have for both burgers and hotdogs, I take another guilt-free bite of my hotdog and passionately agree.