After farewelling Bennelong at the Opera House, Guillaume Brahimi is ready to welcome diners to his new restaurant in Paddington. 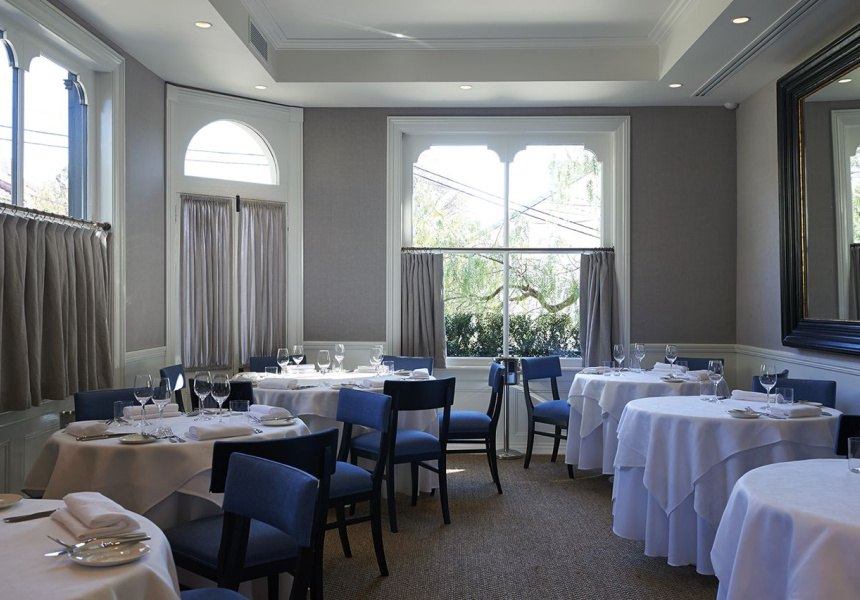 “We are so excited to be back on the Sydney dining scene,” says Guillaume Brahimi, whose much-anticipated restaurant, Guillaume, opened its doors to diners in Paddington this week.

After eight months of extensive renovations, the new space is almost unrecognisable from its former life as Italian dining institution, Darcy’s, which was housed in the Hargrave Street corner terrace for almost 40 years. “We have focused on making it a beautiful, light space,” says Brahimi, “elegant but comfortable.” With its minimal navy and grey palette, Hermès wallpaper, Pierre Frey fabrics and Matisse artworks, the new space has had a suitably tasteful French makeover. It may be a new look, but Brahami insists, “We have kept the classic architectural elements of Darcy’s that made it special.”

The latest venture follows the closure of the French chef’s renowned Bennelong restaurant in Sydney’s Opera House, which hosted its last evening in December after 12 years of service. While Guillaume still offers the full degustation experience, the new restaurant offers a flexible menu that will allow for a more casual dining experience. “People are able to drop by for one course and a glass of wine. The restaurant is elegant and sophisticated, but we still wanted it to have a local and personalised feel.”

While some of the Bennelong classics have made the move to Paddington, including the basil-infused tuna and sensational Paris mash, Brahimi is ready to start dishing up new food. “I’m really excited about the Patagonian tooth fish, and also the marron and pork cheek dish we’ve been working on for a few months,” he says. “We are sourcing from some of Australia’s best producers, so the menu is designed to let the produce shine.”

Heading up the new kitchen is former Tetsuya’s and Est. head chef, Kevin Solomon. Bennelong sommelier, Chris Morrison, has also moved over with the team to run the wine program, which will focus on Australian heritage wines to be stored in the restaurant’s original sandstone-encased cellars. “The team have loved being part of the opening process,” says Brahimi, “we are just excited to get the doors open and do what we do best.”