Neapolitan, New York, Roman and Even Brazilian – Here’s a Guide to Pizza, Region by Region

What are they? And where you can eat them in Sydney? 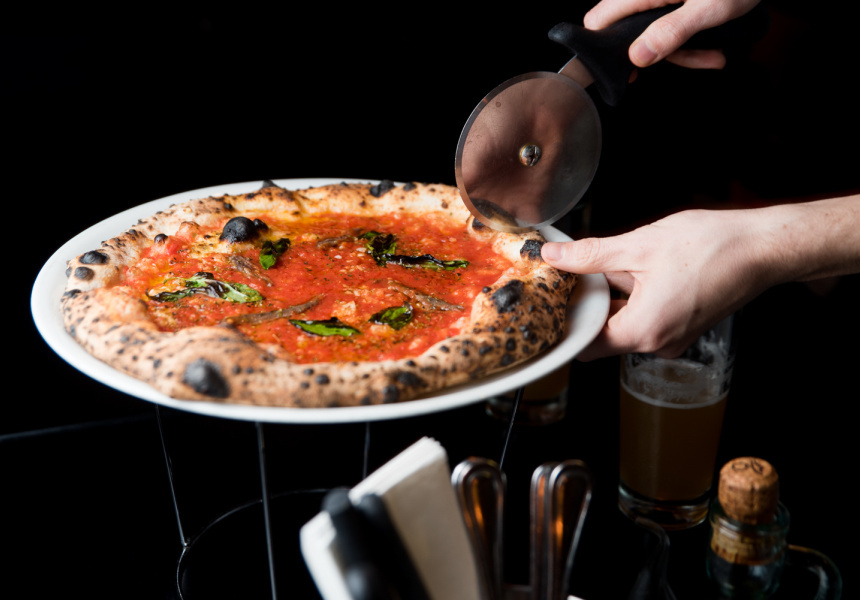 Since its birth somewhere in the east Mediterranean during the past millennium, pizzas have spread. Everywhere they’ve landed they’ve been accepted, loved and assimilated into the local culture.

Different countries and even cities have created their own, meaning there are more pizza styles than there are toppings on a Dominoes Supreme. And like all great multicultural cities, Sydney has many styles too. There are pizzas with crisp bases, soggy bases, pizzas covered in cheese, pizzas sprinkled with za’atar, and one’s with blistered edges, stuffed crusts and fermented-dough bases. So here’s a rundown of some of the most loved pizza styles and where to eat them.

Neapolitan
Of all the Italian styles, Neapolitan is the one most available in Sydney, and probably around the world, too.

It’s believed pizza was born in Naples, a bustling city in the south of Italy, and most Neapolitans are fiercely proud and protective of its traditions. There’s even a not-for-profit organisation founded and run by pizza masters to protect and promote its authenticity around the globe, Associazione Verace Pizza Napoletana (AVPN).

Its strict rules dictate all Neapolitan pizzas should be woodfired, have an elastic and soft dough that’s undergone an eight-hour, two-stage fermentation, and use only toppings from the regions around Naples.

The finished product is soft, sometimes enough to be sloppy, with a puffed-up, almost-bready rim. The most traditional is the marinara, made with tomato, olive oil, oregano and garlic, and a margherita, with mozzarella, basil and olive oil. Here’s where to eat it:

New York
The origin of New York-style pizza can be traced to Naples-born Gennaro Lombardi who, in 1905, opened America’s first pizzeria. He used the soft, pliable Neapolitan bases but changed everything else – especially the size.

They’re so big they’re often eaten and sold by the slice, and generally folded at the crust to avoid the slice sagging. For toppings it’s always tomato paste and a bucket of dry mozzarella (the Neapolitans use fresh cheese), and potentially other ingredients like pepperoni. There’s no perfect representation of this style of pizza in Sydney but these options are similar:

Roman
Roman pizza is much harder to nail down because there isn’t the same obsession with authenticity as there is in Naples. But generally, Roman pizza is thin-based with a small, slightly crunchy crust.

One popular variation is the pizza bianca, a recipe that forgoes the usual tomato base for olive oil splashed on post bake. When either the bianca or the rosso (with tomato) styles are sold al taglio, or by the slice, then things get a bit more confusing. The rectangular slices can simply be cuts of the above, thicker focaccia-like servings, or pre-baked pizzas with fresh ingredients added. The only restaurant that did that in Sydney, Cipro Pizza al Taglio, has now closed. These do something similar, though:

Detroit
It’s rectangular, thick and crisp from being baked in a metal pan (according to legend the first was made in a mechanic’s spare-parts tray). Simultaneously crisp, chewy and bready, this style of pizza is more like a focaccia than most of the other pizzas on this list. The toppings are what you’d find in New York: rich tomato sauce, dried mozzarella and pepperoni.

Lahmajoun and man'ousheh
Also known as Lebanese pizza, Turkish pizza, Syrian pizza, Arabic pizza, this ancient style is the least pizza-like pizza on this list. In fact some would say these aren’t pizzas at all.

Unlike the others in this story, they’re typically made with unleavened dough, so you could say they’re a flatbread, not a pizza. But we’ve included it because it’s visually and structurally similar: a wheat-based dough topped with some combination of cheese, meat and herbs (and it’s likely an early influence on the earliest pizzas.

The two typical varieties are za’atar, and minced meat with onions, and can be found all over the city, often for less than $5. Here are our favourites:

The old-school definition was a pizza with chicken and barbeque sauce a-la Dominoes or Pizza Hut, but that’s as much an international thing as it is Australian. The modern description has more to do with technique employed by a bunch of new-wave pizza makers that use all-Australian ingredients, wholemeal flour and different fermentation times. Try it here: