Nathan’s Famous is in Sydney

A massive American hot-dog chain opened at Rosehill bowling club and no one noticed. 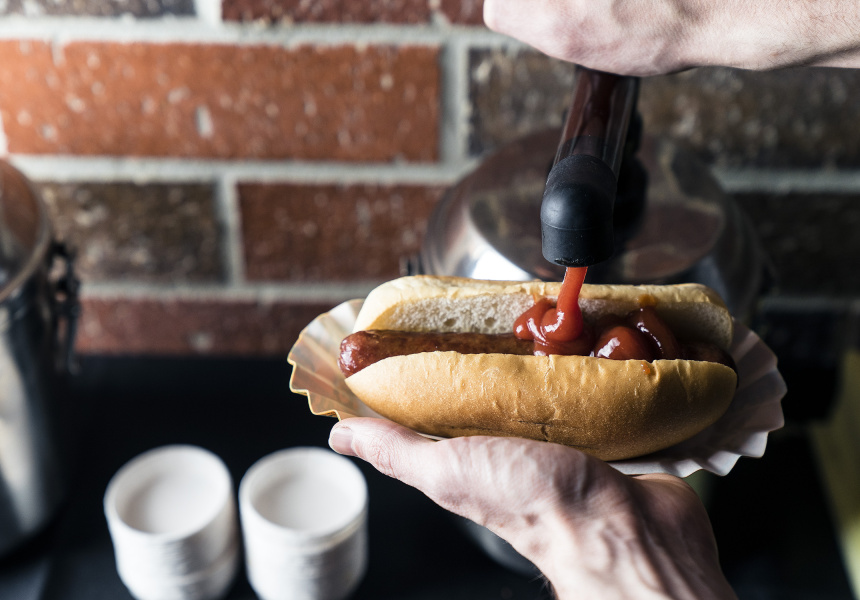 In January, In-N-Out popped up for one day and sold out before it officially opened. In July, Uncle Tetsu’s launched in Sydney and lines formed around the block for days. Sydney loves foreign fast-food chains, but one has stayed under the radar: the century-old (exactly) hot-dog outlet Nathan’s Famous. The hot dogs are served at the home stadiums of the New York Yankees, New York Mets, New York Giants, New York Jets, New Jersey Devils, Brooklyn Nets and many others.

The popular US chain first opened in Sydney outside the Rosehill Bowling club in March as a food truck, and a permanent stall opened in Parramatta Westfield in July, where a few people, particularly US ex-pats, heard about it and streamed in for the famous hot dogs.

The important thing to know about Nathan’s is these hot dogs are very American and quite unlike what we have here. As Mark Alati, the managing director of Nathan’s Famous Australia, says, “This isn’t an artisan product. They're just a really authentic American hot dog and they do it well, better than anyone.”

The crucial part is the sausage itself, and that it’s grilled. “Here [Australia] just about every hot dog you'll have is steamed or boiled. In America they call them dirty-water dogs,” says Alati. Also, unlike many Australian varieties, Nathan’s dogs are 100 per cent beef (a lot here a chicken or pork based). And rather than being overwhelmed by a heavy bun, a Nathan’s is dog-dominant. “It's 43 or 44 grams, the normal hot dog bun in Australia is 75 grams,” says Alati.

Just as it is in the US, the dogs come either plain; covered in chilli (as in American-style mince and beans); or in cheese. There’s a side of crinkle-cut fries, which are usually topped with cheese and bacon, or ranch sauce. There is also and old-fashioned lemonade, which means super sweet and iced.

Alati says the brand has big plans for expansion. “We've been inundated with inquiries, but we'll get the structure perfect before we look at anything further, then they'll pop up everywhere.”