Moon Gets Innovative With Thai Food 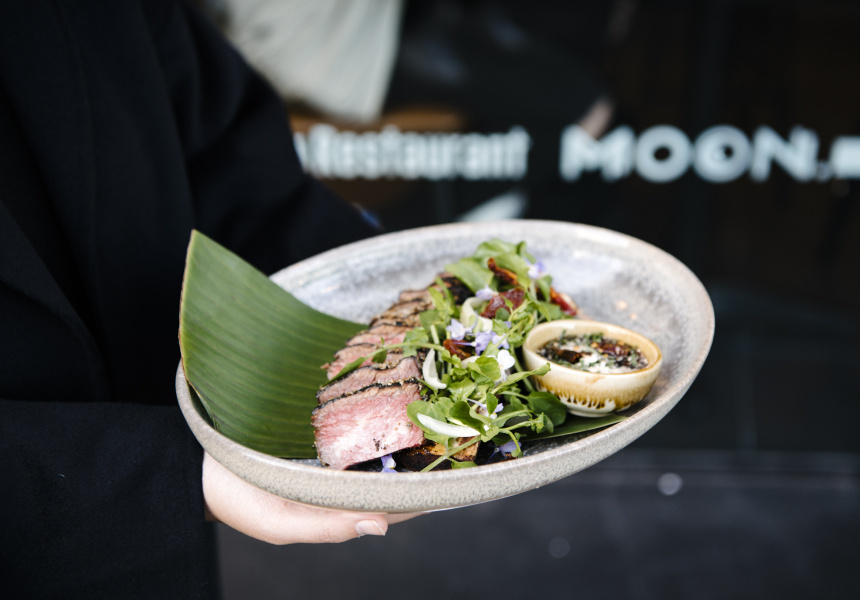 For 21 years this Darlinghurst site was home to Onde, best known for pioneering the confit duck. It’s also one of the reasons why the owners – Jackie Park and chef Aum Touchpong Chancaw (ex-Longrain) – have chosen to open up their new restaurant, Moon, in the same space.

“Because there were such great memories of Onde, we wanted to find a space that can create new memories for Sydneysiders and we hope to become an institution ourselves,” says Jessica Vuong, the restaurant’s marketing coordinator.

Moon plans to do this by plating up European-Thai dishes, something the team says you don’t often see. It also pays homage to Aum’s culinary background, which marries molecular gastronomy with traditional Thai cooking.

During lunch service expect familiar Thai street food dishes, including pad Thai and pad see ew. But it’s the evening when Aum steps it up. There’s a green curry with fish, wintermelon, fried anchovies and basil; and a 72-hour braised beef ribs with a tamarind glaze, crisp eschalot, semi-dried tomato and watercress.

“For dinner I’ve tried to create dishes that are more refined and require complex techniques,” he says.

Park says there are plans to continually change the food and wine menu, which will be marked by monthly wine dinners. “People are unaware you can pair so much with Thai food, so we plan to bring in winemakers from different regions to speak about their wines and we’ll design new dishes to pair with those wines,” he says.

The duo has also set the restaurant up as a small gallery for local artists, with its matte-white walls currently featuring commissioned work by Sydney watercolour artist Blair Zhang, which is in keeping with Aum's 16-year vision of opening his own restaurant.