With coffee by Canberra’s Ona, and waffles with berries, house-made honeycomb and lemon mascarpone you'll definitely want to photograph before you eat. For the team behind Kirribilli wharf’s tiny but popular Celsius Coffee Co., opening Monstera was never part of the plan. Owner Steve Chrun thought he’d start a restaurant with Celsius’s former head chef Jordan Hajek, who had recently returned to Sydney after a stint at one of the world’s best restaurants, Noma, in Copenhagen. But when the cafe space became available on Mosman Bay wharf, their plans changed. Chrun says a restaurant is still the final goal – it’s just a matter of finding the right location – but in the meantime Monstera is a “little side project”.

And little it is. It’s in the former Harryfields space, right near the ferry dock, and at 25 seats, it’s compact. In fact, much of it is on the wharf itself. Inside, there are banquettes in Victorian ash timber and bar stools, some seats lucky enough to have views of the sparkling bay. An old row boat hangs overhead; it’s been given new life as a vessel for hanging greenery, including – of course – monstera plants.

Hajek has helped build the menu, and you can tell – some dishes available at Celsius are now served at this harbour eatery, too. These include Something Light (heirloom tomatoes, avocado, goat’s cheese and house-made chilli lime on toasted sourdough) and the Seriously Green (toasted sourdough piled with sautéed kale, asparagus, lime avocado puree and poached eggs).

The most Instagrammable dish at Celsius is the waffles, and at Monstera it’s paired with berries, maple syrup, house-made honeycomb and lemon mascarpone. “We pride ourselves on using the freshest produce bought daily from the markets,” says Chrun. 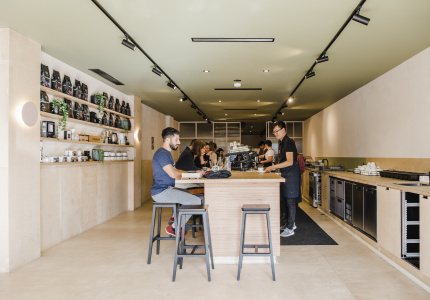