It’s all about coffee at the new slick headquarters for this Sydney company – with workshops, yoga and a cool collab with Archie Rose coming soon. If you frequent cafes in Sydney – or on the east coast of Australia – you’ve probably drunk Will & Co coffee. You might not have realised it, but you would have noticed how good it was.

It’s served in all states and territories bar South Australia, and locally you’ll find it at Bondi’s Porch & Parlour, Coogee Pavilion, Pasture of Balmoral and a small branded site on George Street in the CBD.

The team also had a site on Hall Street in Bondi, but that closed to make way for the sleek new sunlit corner spot at the back of the Pacific building on Gould Street, which opened in December.

The Will & Co story started seven years ago, when a group of friends took their years of coffee experience, and decided to start something new. The company was born from a love of coffee, a love of coastal living and a love of friends.

“The ‘Will’ isn’t really the important part of the name,” director Josh Passaro explains over an iced cold brew. “What’s important is the ‘and Co’. We’re a collaboration. We’re about the company we keep,” he says.

At first glance, it’s hard to tell if the modern space in white and pastel-blue tones is a cafe or a bar. Interestingly, it’s neither – but in a way, it’s also both. It’s a cafe because you can buy and drink coffee here, and a bar because, well, it literally has a big bar (and a stunning, luminous resin one at that). But that’s where the cafe-slash-bar distinction ends.

It’s really a concept store. It was built primarily for education and training – where the Will & Co team can show current and prospective clients what they’re about, which includes a focus on sustainability. For regular punters though, it’s also a relaxed space where you can settle in for a coffee on a comfy couch or a wooden stool at the window for primo people-watching.

There are plans to host barista competitions, latte-art smackdowns and educational talks about the science and culture of coffee. The team has partnered with community group Transition Bondi and local recycled surfboard-makers Spooked Kooks, which will use the space to run talks and workshops about sustainability. There’ll also be yoga classes, and there’s an exciting collaboration with distillers Archie Rose in the works to age green coffee beans from Ethiopia in whisky barrels to create a limited-edition single-origin coffee.

You won’t find any food on the menu – this place is all about the coffee, which is listed on the menu as “hotties” and “coldies”, so you can get a flat white or a shot of espresso poured over ice, and everything in between.

There’s also a wall of merchandise – keep cups, canvas bags, beach towels – and specialty coffee items and contraptions for the home. You can grab freshly roasted whole and ground beans too, which are roasted at Will & Co’s commercial site near Homebush.

Opening a shop in Bondi wasn’t ever in question. “It’s like our spiritual home; it made sense for us,” says Passaro. Subtle coastal touches in the decor speak to this. There are two custom-painted Spooked Kooks surfboards on one of the walls; surf books and magazines scattered on the tables; and blue, beach-themed murals throughout the space, the combined work of two long-time Will & Co friends – WA-based illustrator Chris Nixon and Bondi local Steve Smith. 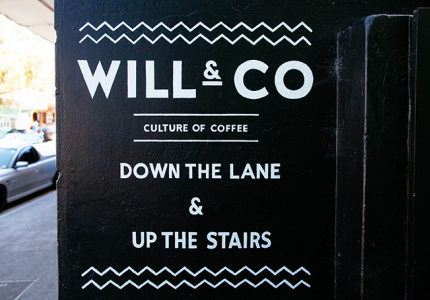