The Melbourne Food and Wine Festival Just Dropped Its 2020 Program, and its Worth Travelling For

There’s a spaghetti party, a chip party, an augmented-reality wine tasting and an eight-course after-hours dinner at Lune. Bring extra napkins – this could get messy. 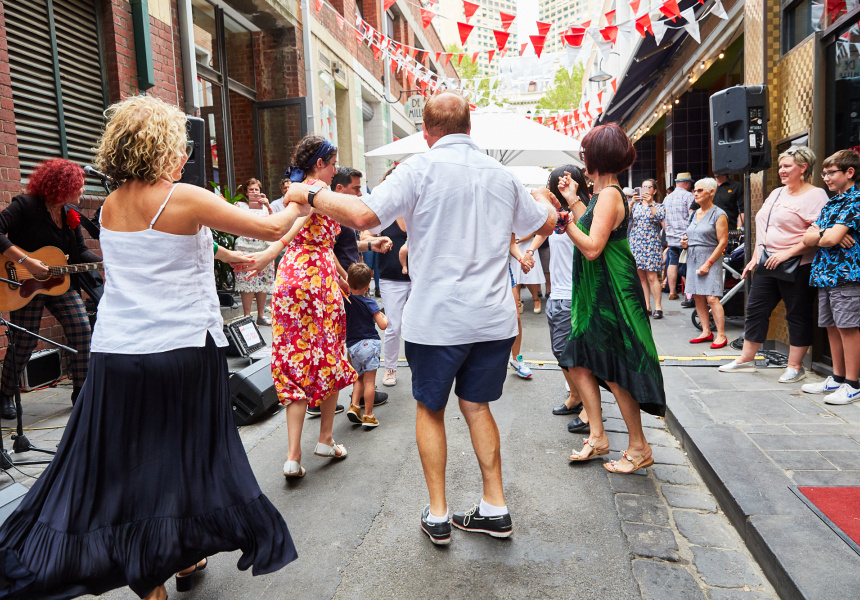 There’s no questioning it – you need to eat and drink to survive. So that means the Melbourne Food and Wine Festival (March 19 to 29) is the perfect opportunity to celebrate life itself. Or at the very least, eat some really yum stuff and pop a few corks.

Queen Victoria Market will be the festival’s new hub for 2020, and most feature events will be hosted there. Highlights include The Big Spaghetti pasta party, with food by a handful of great Melbourne Italian eateries, Tipo 00, Capitano, Rosetta and Caterina’s. There will be drinks by tiny laneway bar, Bar Americano, and Sydney's vino expert Giorgio De Maria.

The Welcome to the Jungle party – hosted by vegan vixen Shannon Martinez of Smith and Daughters, with support from local chefs Matt Wilkinson (Crofter) and Jerry Mai (Annam) – will celebrate plants in all forms, from vegan dishes to living-room decor.

We're particularly excited about the Maximum Chips party – a playful (and salty), casual night with all-you-can-eat shoestrings, French fries, crinkle-cuts and controversially, wedges (you can discuss if it's a real chip on the day).

The festival has collaborated with innovative fine-dining chef Ben Shewry, of lauded restaurant Attica, for “Attica Presents”. It'll be a full afternoon of talks, performances and music hosted by Shewry (he dabbles with DJing) around the theme of hope and community. Entry is free with pre-registration.

Back again is the World’s Longest Lunch, this year hosted by culinary legends Stephanie Alexander, Philippe Mouchel and Jacques Reymond. 1600 guests will sit down for an outdoor feast in Melbourne’s Treasury Gardens.

There are a further 100-plus events happening all around the city, too. Best-selling New York Times food writer Alison Roman is hosting an intimate Brooklyn-inspired party with Martinis and minimal-stress snacks at Half Acre; sustainable Sydney fish butcher Josh Niland of Saint Peter is teaming up with leading Melbourne restaurateur Andrew McConnell for a four-course lunch at his CBD eatery Cumulus Inc; there’s an eight-course after-hours dinner at world-famous Lune Croissanterie; and an augmented-reality tasting of wine from Italy’s volcanic regions at Marameo.

But the festival isn’t just about eating and drinking. Next year will mark the 40th anniversary of the first edition of the Australian Women’s Weekly Children’s Birthday Cake Book. The book’s contents and recipes have been embedded into the childhood memories of generations of Australians, and they’ll be celebrated in an exhibition at the NGV’s Ian Potter Centre at Federation Square.

The Melbourne Food and Wine Festival runs from March 19 to 29, 2020. Full program and tickets here.