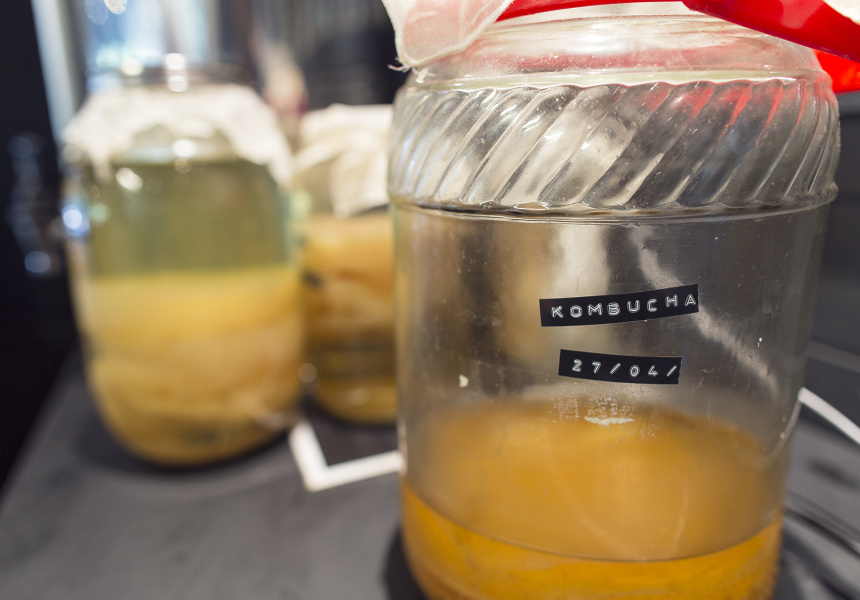 When we met Iain McRae and Sam Sgambellone they were standing over three black dishes, two with what looked like shards of crystallised rock and another with a mat of ambiguous goo. “That’s a zoogleal mat,” McRae says. In other words, a melting pot of microorganisms, or the base of a batch of kombucha he’s about to make.

McRae and Sgambellone are Mecca Espresso men. Now they’re also in another club, albeit a much smaller one. “Sammy and I are the Fermentalists." The duo has been experimenting with producing kombucha and water kefir fermentations for around two years now, but just recently they’ve arrived at a critical point – they’ve made them taste good, really good.

Here’s a quick scientific intro for the unacquainted: kombucha is a lightly fermented tea drink based on a symbiotic culture of bacteria and yeast, or SCOBY for short (that’s the ambiguous mat of goo). Water kefir, or tibicos, is a more carbonated drink made from mini SCOBY grains, water, sugar and fruit. The SCOBY eats the sugar and produces carbon dioxide and various acids, making the drinks more sour and carbonated depending on how long they’re fermented for. Depending what you put in the batch with the SCOBY, it can change the flavour of the drink. “Ours is on the more accessible side. It can be more sour or vinegary. We're stopping it at a point where it's more of a drink than a tonic,” Sgambellone says. Accessible is pretty accurate, the kombucha is full-bodied, fresh and lightly tangy.

While kombucha is fermented with only tea, the water kefir batches go through two fermentations. There’s an initial batch with fig, lime, raw sugar and molasses, and a secondary ferment to differentiate the flavours. We tried a creaming soda with raw sugar and Tahitian vanilla that tastes like an ice-cream float, a refreshing and sweet passionfruit soda and a ginger beer, which tastes exactly like a pleasantly sourer equivalent of its namesake.

Sgambellone says at some stage he’s interested in selling some of their more intense, older fermentations. “It might be consumed like people do with apple cider vinegar, just a little nip in the morning.” At the back of Mecca Ultimo, their makeshift production facility, they have what’s affectionately called the SCOBY hotel, a waiting room of half-finished projects and new fermentations. One they have high hopes for is Jun, a kombucha-like ferment that eats honey and green tea. “It's fun for us because, we're not learning something because there's a great solid body of evidence, it's just through sheer trial and error,” Sgambellone says.

The duo will share its knowledge with fermentation workshops at Mecca Ultimo.

The Fermentalists’ products are currently available by the bottle at Mecca Ultimo.