A one-stop shop for the best plant-based food and products in Sydney. 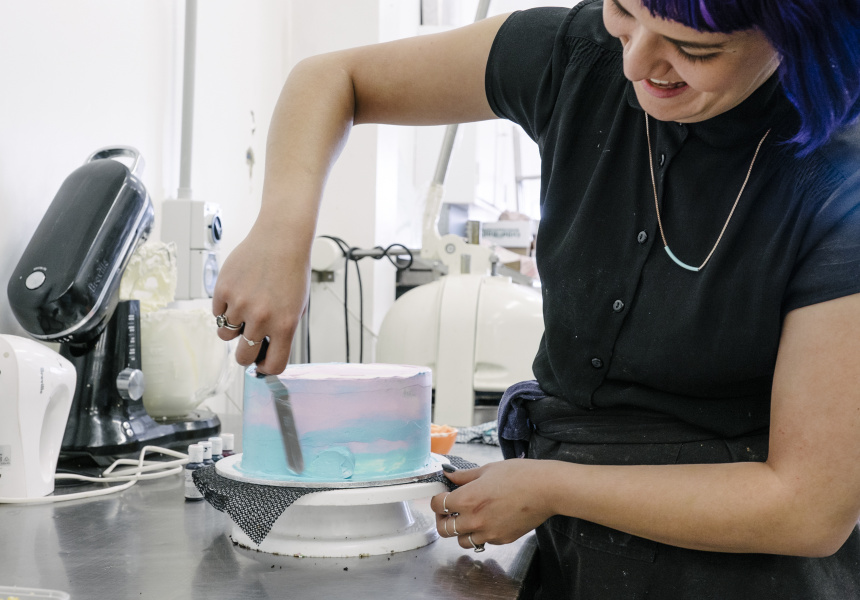 Maker is like an art school for the vegan community. A place where anyone can come, make what they love and feel completely supported doing so.

They serve and sell their wares in the front area of the collaborative workspace, a tiny cafe/grocer with crates and palates as seating; all of which has been made in the open kitchen behind it.

“One of our biggest things is just to show people they can do it because we did it,” says Maker’s Kate Jones, who’s joined in the business by Annabelle McMillan. “I was a corporate person. Annabelle was in the theatre. I'd never worked in hospitality and then I went vegan and opened a market stall.” Jones also runs The Vegan Teahouse, a cakes, tea and nut-butter business. McMillan makes sculptural, plant-based cakes under the brand My Little Panda Kitchen.

Maker is the new home of both of their businesses and the part-time base for many similar up-and-coming makers.

Just because it’s a community network and collaborative space doesn’t mean the products are unpolished. “We want to support people but we also need to be proud of what we’re selling. We're not going to convert anyone with mediocre food,” says McMillan. “We really want to surround ourselves with the people who are the best at what they make and do.”

Along with McMillan’s colourful cakes and Jones’s homemade Nutella, brownies and tea blends, Maker also stocks most of the best products Sydney’s vegan community has to offer. There’s baked goods from Rhubarb Bakes, Treat Dreams and That Vegan Lady; gelato from Over the Moo; animal-product-free cosmetics from Hanami; lasagnes by Herbisaurus and more. “A lot of the makers we're working with are women – there seems to be a surge of female makers; so many babes making good shit,” says Jones.

Jones and McMillan say they hope to offer the community and the general public further support through workshops and more collaboration. Their biggest project will happen next year, when they take the best products from Maker into a new cafe, which will open up the road.