Produced by Broadsheet in partnership with Ubisoft & Xbox.

Ever eaten a sandwich inspired by a video game? In partnership with Ubisoft and Xbox, we team up with Sydney’s Lucky Pickle to make a sandwich worthy of a video-game hero. We can’t travel overseas right now, but thanks to Lucky Pickle sandwich bar, we can bring the tropics to us (in sandwich form at least).

Lucky Pickle in Surry Hills is releasing a limited-edition crumbed fish sandwich, inspired by the launch of Far Cry 6 on Xbox. The open-world, narrative driven video game set in the fictional Caribbean island of Yara. In this sixth iteration of the Far Cry series you play as a character called “Dani Rojas,” leading a guerrilla insurgency against the ruthless leader, Antόn Castillo.

“I remember playing Far Cry 2,” says Lucky Pickle owner Daniel Grieves, of the second game in the series, which came out in 2008. “The graphics and gameplay are so much more advanced now, it’s insane.”

But every freedom fighter needs to eat, right? Enter Lucky Pickle and the tropical sandwich.

The breaded fish and pickle sandwich perfectly balances sweet, salty and spicy flavours. “Fish is such a predominant food in Caribbean culture,” says Grieves. “But they also have a beautiful escovitch pickle, made with habanero chillies and allspice, and that really sealed the deal for me. We’re the Lucky Pickle, after all!”

Keeping things fresh and simple is the mantra at Lucky Pickle, where there are only four sandwiches on the menu. For this one, barramundi fish is crumbed and deep fried, set on a bed of shredded cabbage, with pineapple aioli and a chilli kick of escovitch pickle. It’s served on a soft, flaky baguette.

“The pickle is just delicious,” says Grieves. “In the Caribbean they use pimento seeds, which we call allspice. It gives it a really nice spicy flavour. The cabbage and the pineapple aioli fill it out and give it a bit of creaminess.”

Grieves originally considered centring the sandwich around Jamaican jerk chicken (where the meat is marinated in a hot spice mixture), but he says in the end they couldn’t pass up the opportunity to incorporate the pickle, which goes perfectly with white-fleshed fish.

The secret is in balancing out the flavours, while allowing the ‘hero’ ingredients to shine through. “With the fish and pickle, you have a lot of strong, savoury flavours. So being Caribbean-influenced we wanted to have something a little bit sweet in there, especially to offset the habanero peppers and really round it out” says Grieves.

The limited-edition sandwich (and the game) launches on October 7. Be quick, though: you’ve only got until 22 October to snap one up before it’s game over.

This article is produced by Broadsheet in partnership with Ubisoft and Xbox.

Produced by Broadsheet in partnership with Ubisoft & Xbox. Learn more about partner content on Broadsheet. 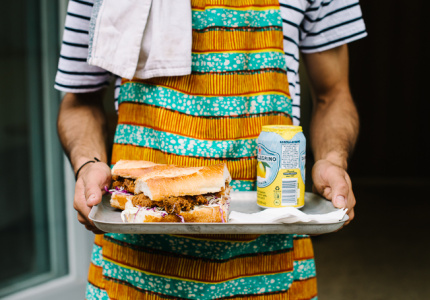