At the heart of chef Luke Powell’s new restaurant is a smoker that weighs a tonne, producing some seriously great-tasting meat. 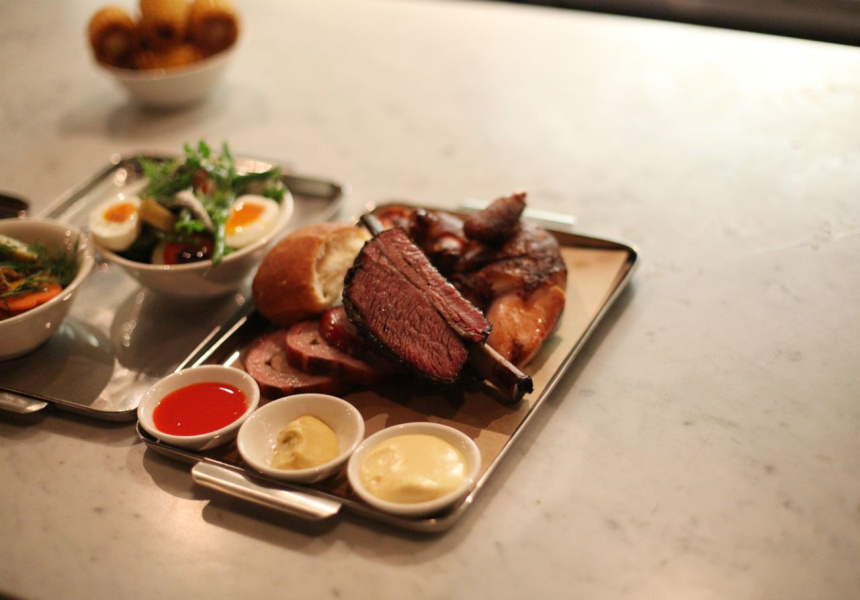 For those with menu-choice anxiety, restaurants with a singular focus are a source of relief. Former head chef at Tetsuya’s and Mary’s in Newtown, Luke Powell, has opened LP’s Quality Meats in Chippendale, serving mainly cold cuts and smoked proteins. There’s vegetables too, and they’re great, but if you go, go for the meat.

The restaurant bolsters the already burgeoning suburb of Chippendale. Before opening LP’s, Powell was working at nearby Ester for nine months, ducking around the corner to check on renovations.

The kitchen and bar take up almost the whole length of the dark restaurant, which is split up by long wooden communal tables. The staff wears T-shirts emblazoned with “LP’s Meats” in diner-style lettering across the back, (also for sale at the entrance) and dishes are assembled on silver trays at the open pass. It feels like a mixture of a classy German beer hall and a rockabilly New York diner.

Powell is relishing the chance to experiment with cured as well as smoked meats. From the cured menu, the coppa di testa is a fat sausage, sliced almost pancetta-thin, made from the meat of a pig’s head, breadcrumbs and parsley.

The smoker, shipped over from Texas, burns whole logs and switches to gas to keep the temperature consistent, imbuing the meat with a rich, smoked flavour and a crisp outer shell, keeping the flesh tender in the centre. “It can fit 150 chickens in it,” says Powell. “We can also smoke vegetables, maybe a tray of potatoes in the bottom to catch the drippings of the smoked meat. The opportunities are endless, which is why the menu is so small, so we can keep changing it up.”