The chorizo is made to the Porteño chefs’ particular specifications, while the pig’s head sausage is a great all-rounder, perfect for breakfast or to spice up a pasta. 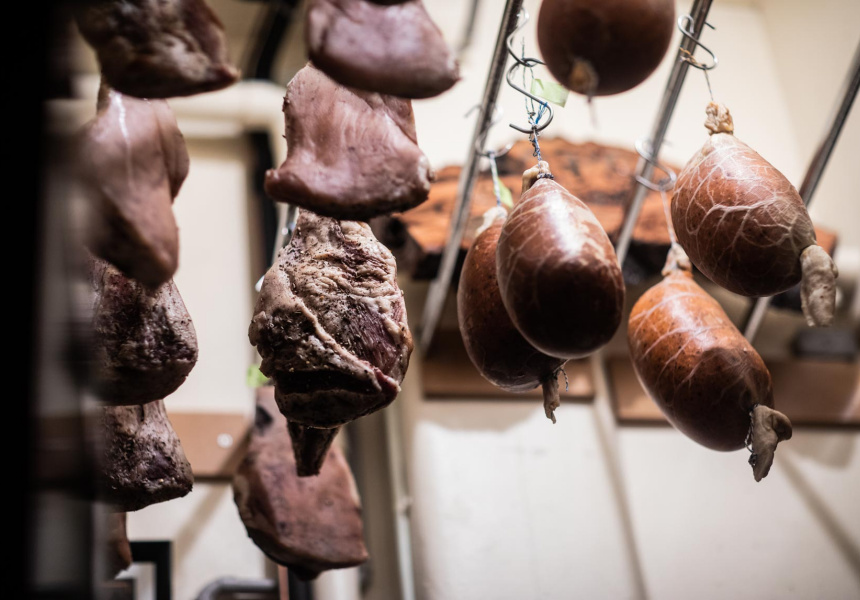 When Luke Powell made the decision in February to close his eponymous diner, LP’s Quality Meats, and focus on the business’s expanding wholesale operations, he unknowingly pre-empted a worldwide wave of closures triggered by the Covid-19 crisis that would decimate the global hospitality industry.

Now, with many of the city’s top restaurants – including Powell’s other baby, Newtown pizzeria Bella Brutta – concentrating on takeaway and home delivery, LP’s has launched the first in a new line of ready-to-cook smoked-meat retail products.

“We always knew we were going to be placing a focus on smallgoods production,” Powell says. “We’re building a bigger space for the production of our mortadella and smoked sausages, but due to this climate we were forced to rethink our plan to go guns blazing into wholesale, and consider retail until the world recovers.”

Featured in the debut retail release are two veterans of the LP’s range: the Chorizo Porteño and the pig’s head sausage. The chorizo is Powell’s take on the classic Spanish sausage, prepared to the strict specifications of Porteño chefs Elvis Abrahanowicz and Ben Milgate (“This is not your run-of-the-mill chorizo,” Powell says). The pork sausage – which Powell says is a great all-rounder, perfect for breakfast or cut into coins, fried and stirred through a pasta dish – is seasoned with white pepper and garlic.

LP’s seasoned smoker gives the sausages a flavour profile distinct from other smoked products on the market. That’s because, rather than the sawdust and chips common to larger-scale production facilities, this one uses whole applewood and ironbark logs.

As the sausages have already been cooked in the hot smoker, Powell recommends placing them in a saucepan filled with cold water and bringing it to a boil before surrendering them to direct heat. “It produces a better snap after you throw them on the barbeque or into the pan.”

While the sausages are so far available only at Continental Deli’s Newtown and CBD locations, Powell says there’s already been interest from other stockists.

As for what comes next – the expansion of LP’s wholesale business and the long-rumoured development of a licensed deli-esque storefront in Chippendale – Powell remains cautiously tight-lipped, teasing only the promise of future smallgoods releases.

“The limited products we have released now are a good way for us to feel out demand, and help us get packaging and production specs correct. We have a larger range of sausages and other smoked products up our sleeves.”