Los Pollos Hermanos from “Breaking Bad” is Popping Up in Sydney For two days next week, Thirsty Bird in Potts Point will transform into the infamous (and fictional) fast-food chain Los Pollos Hermanos from Breaking Bad and Better Call Saul.

“We'll be giving out free meal deals all day for two days, which include two pieces of Southern fried chicken, curly fries, sauce and a drink,” says Sam Horowitz, the owner and chef at Thirsty Bird.

The owner of the fictional Los Pollos Hermanos, Gus Fring (played by Giancarlo Esposito), will be there. Stan, which streams Better Call Saul, is also organising a meet and greet with the actor for 25 fans. To be one of them, and for more details, visit the event’s Facebook page. 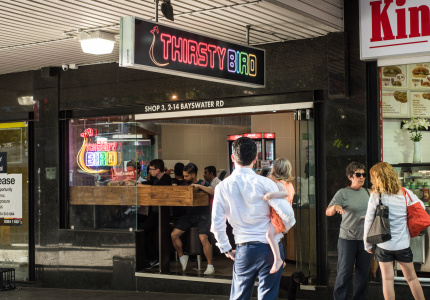