It’s 1998 and you’ve just sat down to dinner at a new place in Thornleigh, in Sydney’s north-west. You’re greeted by a waiter with a heavy accent and he hands you two menus: one with surf and turf, steak and burgers, and another with qabli pilaf, mantu and karayee.

This was Zac and Malalai Zikria’s first restaurant. They came to Australia from Afghanistan as refugees. Zac worked in factories and restaurants until he had enough bank to open his own venue, not serving the Greek, Italian or pub recipes he’d learnt in Sydney, but his wife’s food, the cuisine of his homeland. The problem was, no one in Thornleigh had any idea what that food was.

“You couldn't sell Afghani food then, but we did good business with steaks, seafood and calamari. It's easier too,” Zac says with a laugh. “People would come in and say, ‘we want a curry’. At first, I was offended, Afghani food is different. But then I said, ‘If they want curry we'll make them green-curry chicken. It started as a joke, but it sold really well.”

Now it’s a different story. Last year the Zikrias moved the restaurant to Bella Vista, also in Sydney’s north-west, after 20 years in Thornleigh. They still sell surf and turf and chicken parmigianas but hardly anyone orders that. That side of the menu has been declining for years. Now people want to try something new, he says, something Afghani.

When they ask Zac what they should eat he tells them to order the same thing his Afghani customers order (he has a lot more of those now he’s in Bella Vista): the qabli pilaf, a mound of aromatic rice spiced with cardamon, sweetened with dried fruit and mixed with lamb, nuts and carrots. It’s almost the equivalent of pho in Vietnam or hummus in the Levant, that one dish everyone likes and every migrant misses.

Qabli pilaf is a good example of Afghani food, a subtle cuisine that has been influenced by Persia, central Asia and the sub-continent. “It’s just below the surface, not spicy, sour, salty or something like that, just subtle,” says Zac.

Mantu as well. The lamb and onion dumplings are reminiscent of Mongolian varieties but topped in yoghurt and spiced lentils. When his Thornleigh customers ordered this, or the yoghurt-topped pumpkin, they were surprised. “We use lots of yoghurt but it's Greek yoghurt and at that time people bought sweet yoghurt. People would say, why is it not Yoplait?”

If you visit in the morning ask instead for karayee. It’s curry-spiced chicken wok-fried with eggs, ginger, tomato and spinach. “This is street food,” Zac says. “They cook it in three minutes and you eat it with bread.” That and a qaimaq chai, a green tea mixed with clotted cream and sugar. “We have this for breakfast or in the afternoon with a salted cookie.”

Of course if you do want to try Zac’s non-Afghani food, you can. “The green curry still sells quite well,” Zac says, laughing again. “Funnily enough, I had customers following me from Thornleigh all the way here for that curry.”

This article first appeared on Broadsheet on June 26, 2019. Menu items may have changed since publication. 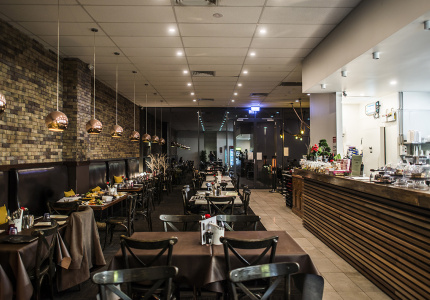