When we meet Leslie Brull at his Bondi Road cake shop, he looks like the stereotype of a pastry chef. He’s decked out in a white apron, a chef’s hat and there’s more chocolate and butter on him than covers the bench he works off. He’s been making cheese and cherry strudels, biscuits and sponge cakes since the early hours of the morning – what he does every day.

He invites us into his office, a tiny storage alley in the back of the kitchen. He pulls out two buckets, puts a tea towel on each, and we take a seat as he tells us the story of his 57-year baking career. When we ask him if he has plans to retire he says, “No. I always say to my customers, ‘if my body lets me I will do it as long as I can.’ I have even had a serious talk with my son [about] opening all over the world.”

Hungarian-born Brull and his wife Georgina opened Wellington Cake Shop in 1979. At first it was a standard Australian bakery – selling pies, finger buns and bread rolls – with one exception. It also had a cabinet dedicated to Hungarian treats – things such as sour cherry and cheese strudels, jam biscuits and dobos (sponge cake layered with chocolate buttercream).

At that time, Sydney’s eastern suburbs were well populated with Brull’s compatriots, many having left following the 1956 revolution (leaving Hungary was easier following the collapse of the communist regime). Brull’s pastry shop, although one of six in the area, was very busy. In fact, it was so popular Brull gradually phased out the cream rolls and concentrated on what he was really good at.

“It’s a very secret recipe,” says Brull. “It came from a lady [who worked with Brull at Wellington for more than a decade] who got it from a famous pastry shop in Hungary. She told me, ‘You can’t tell anyone this recipe’. This cake has made my business; you won’t find another like it in Sydney or Hungary. I always have to say thank you to her.”

A lot of Hungarians have left the area but Wellington Cake Shop, and its kuglóf, are still held in the highest regard. “The area has changed a lot; there are few Hungarians here but they still come. Now they just travel for birthdays, weddings and celebrations. They make a big effort; it is really great,” says Brull.

“I’m very happy seeing people enjoy my product. Money is secondary for me, what gives me pleasure is seeing people happy. This shop and my customers are my family.” 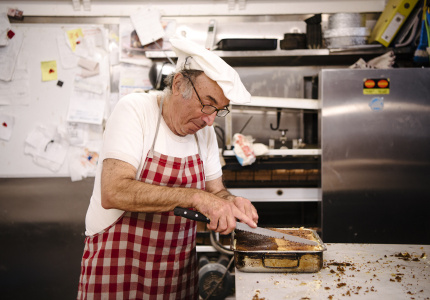