Serving baklava and five-cheese mousakka for more than 40 years. 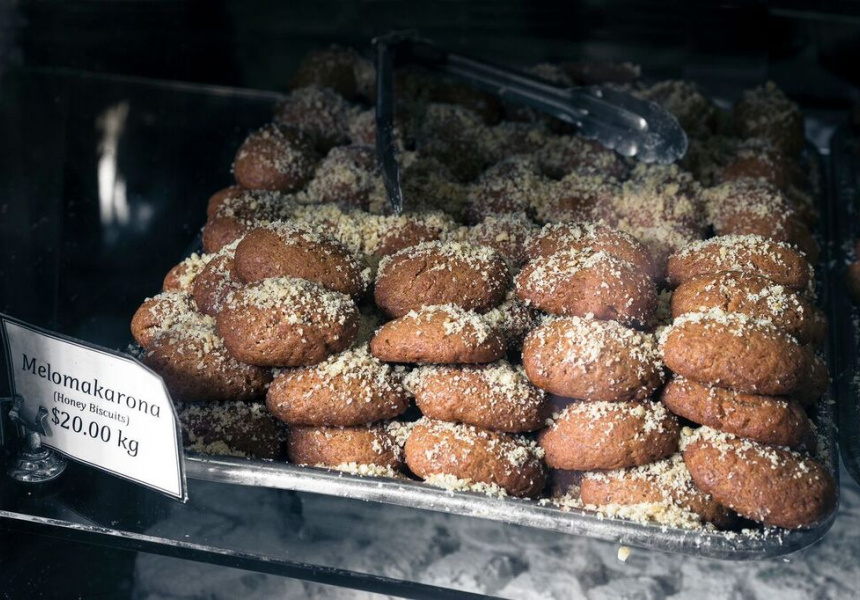 When a Greek restaurant is filled with Greek diners, you know it’s going to be good. The following places, covered in Broadsheet’s “Local Knowledge” series, are well worth a visit.

New Chambers Greek Islands Taverna
This restaurant has been in the Sutherland Shire for more than 40 years. In the Greek community, the Hatzikiriakos family is famous for making food “like an auntie” with old-school dishes for which almost everything is made by hand. Every morning Yanni Hatzikiriakos and his wife roll out fresh pastry for spanakopita, which are little triangles of pastry filled with spinach and cheese. Even labour-intensive desserts such as bourekakia (a flaky semolina-custard-filled pastry fried and drizzled in syrup and cinnamon) are made by hand before each service. There aren’t many restaurants in Sydney where you can find sikotakia (soft, pan-fried chicken livers dressed in oregano and lemon) and lukankia (Greek sausages). But don’t be misled, just as many diners come for the classics, such as its five-cheese moussaka; or the slow-cooked lamb casserole with okra. Best of all, if you hang around late enough you can expect ouzo shots with the 71-year-old owner, Yanni.

Cyprus Community Club
There’s a different vibe at community clubs. Unlike at restaurants or cafes, you feel as though you’re at a family gathering. That’s what it’s like at Stanmore’s Cyprus Community Club on a Saturday night. Cyrpus and Greece are of course different countries but the cuisines share similarities. Aphrodite, one of the two restaurants at the club, serves widely recognisable Greek dishes such as souvlaki, barbequed octopus and Greek salad. There are also a few Cypriot specials that are difficult to find anywhere else in Sydney, too. At Cafe Ellie’s, the other restaurant, koupes (a snack of minced pork and crushed wheat) is a crowd favourite. And if it feels like home cooking, that’s because everything is made at the home of Ellie Stassi, the owner of the cafe. Chef Jordan Jordanou makes his sheftalies in-house with minced pork, onion and parsley, wrapped in caul fat and cooked until golden.

Athena Cake Shop
Regulars have been returning to Athena Cake Shop for more than 35 years. Since 1974, the Ahtypis family has built a strong reputation for its Marrickville bakery. The best-preserved time capsule is the front window, stacked with Greece’s most sacred treats, from galaktoboureko to baklava. Everything here is handmade by Chris Ahtypis or by Olga, Dimitra and Harra – Athena Cake Shop’s squadron of older Greek women. Their speciality is Greek pies and the crown jewel is the spanakopita. There’s a sweet bougatsia pie, too (imagine a ricotta cheesecake wrapped in filo pastry). The ladies at Athena swear by hand-rolling all their pastry, even if it’s more tiresome than using a machine.