It’s like walking into the very yellow living room of a veteran Taiwanese chef. 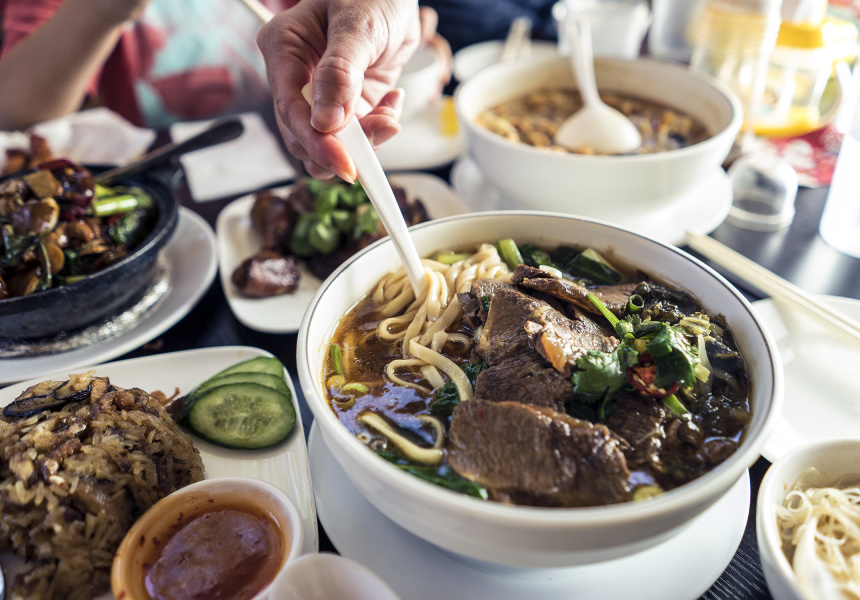 You can tell a lot about a person by looking at their hands. Antonio Kuo’s are thick and worn with burns. He’s been cooking every day since he was 16 years old. He’s lived and worked in Spain (where he chose his name) and Belgium, and back in Taipei, his hometown, he studied under Ah-chi-shih, one of Taiwan’s most venerated chefs.

Now he’s 62. He sits like a warrior, smiles like a cartoon and, importantly, still cooks every day. His restaurant is Taipei Chef, an unpretentious and adventurously yellow-walled pocket of tables in Artarmon. Among Sydney’s first wave of Taiwanese immigrants, Taipei Chef is loved for its traditional food and its owners, Kuo and May Young, his affable wife. While Kuo develops the food, Young creates the restaurant’s family atmosphere, greeting every person like a friend, many by name and some with their usual orders.

The food is old-school Taiwanese. Not the bao buns, crispy fried chicken and novelty waffles you find on Taipei streets and in exported Taiwanese chains. These are recipes Kuo learned in his youth. The most popular is the smoked chicken. It’s cooked twice, once with steam and then smoked with tea and sugar. The result is absurdly succulent and aromatic meat coated in a varyingly crisp-to-soft skin. Most tables will order that or what Taiwanese people call “three-cup chicken”. It’s a sizzling pot of tender meat that’s become sticky from a slow infusion with soy, vinegar, rice wine, sugar, ginger and basil (a common ingredient in Taiwan, like the variety used in Vietnam and Thailand).

Three-cup chicken (also substituted with squid or pork at Taipei Chef) is a common part of Taiwan’s snack culture, famously led by the country’s prolific night markets. For more street food try the Taiwanese beef noodle soup and sticky rice. On the Taipei streets you can find pretty much anything minced into a sticky rice dome, but here it comes with pork, dried mushrooms, prawns and a tangy sauce. A popular snack at Taipei Chef is the sweet-potato fries with plum powder. Both sweet potato and plum powder are integral ingredients to the Taiwanese cuisine, and this is its perfect marriage – crunchy, slightly sweet, tangy and immensely addictive – one of those easy dishes everyone can like.

More erudite Taiwanese eaters will notice a few anomalies on the menu (besides a few crowd-pleasing Chinese dishes). The calamari rolls with salted egg and seaweed are not something you’d find in any other Taiwanese restaurant, here or in Taipei. That’s a vestige of Kuo’s training with Ah-chi-shih. The master chef was part of a tradition of Taiwanese banquet chefs who put a lot of effort into presentation, flair and creativity. 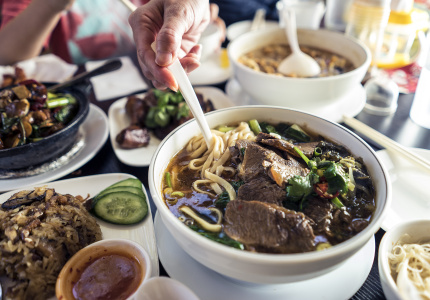