Sydney’s original Burmese restaurant serves a special spicy chicken biryani, which the owner learned from a master chef in Rangoon. 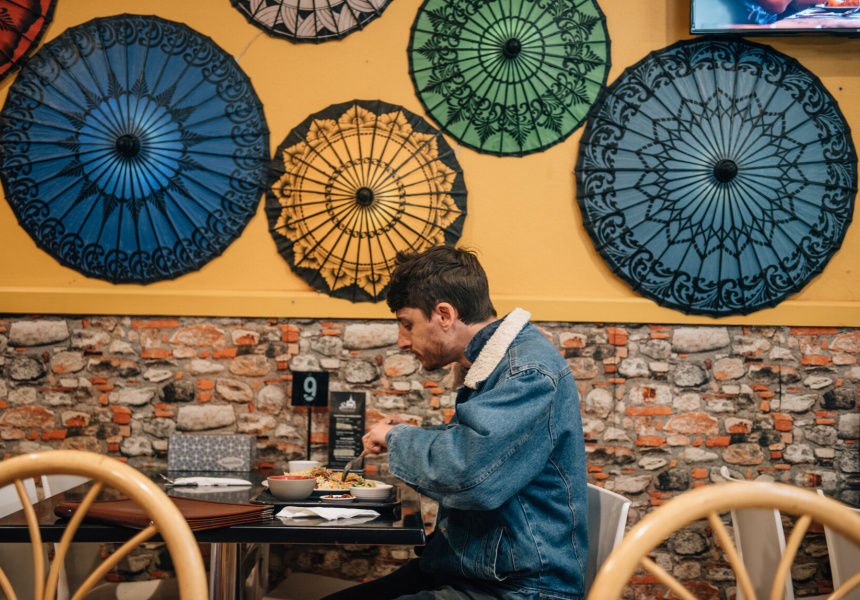 Sun’s Burmese Kitchen isn’t Hsan Myint Aung’s first restaurant. In 1996 he opened Eastern Sun on one of the main streets in Blacktown, in Sydney’s west. It was an Asian restaurant with a broad multicultural menu, as the name suggested. It didn’t work, but Aung knew what he’d done wrong. “I had mixed up all the foods: Indonesian food, Malay food. That was my mistake. I was not specialised,” he says. “I didn’t have much experience, it was difficult.”

He spent the next 10 years working in a bread factory, putting aside money each week so he could open another restaurant. “I wanted to introduce my food to the people – all the secrets of cooking my mum taught me,” he says.

Aung opened Sun’s Burmese Kitchen with his wife Lyn on a quiet Blacktown backstreet in 2012. “It was a bit scary,” he says. But he didn’t need to worry – it's endured for seven years, and up until recently it was the only traditional Burmese restaurant in Sydney (Burman Kitchen moved from Granville to Surry Hills last year). He describes Burmese food as a mishmash of cuisines from surrounding countries – borrowing the spices and curry-based dishes from India, the pungency and tartness of Thai food, and the noodles and stir-fry technique from China.

When we ask him what his speciality is he lists half the menu: battered prawn fritters with a tamarind dipping sauce, a pickled ginger salad with crisp fried garlic and split peas, and fried noodles he mixes with a hot chicken curry. There are also textural salads: one with pickled tea leaves, nuts and lentils; another with pickled ginger, fried garlic and dried shrimp. But when we ask him what most of his Burmese customers order, he instantly points to an autumnal-coloured chicken-and-rice dish called danbauk.

He learned the recipe from U Kar Sin, an elderly Burmese man who used to run a famous danbauk restaurant in Rangoon, Myanmar’s capital. “I met him 30 years ago in a boarding house in Bangko,” says Aung. “He is the best biryani chef in Burma. His restaurant is famous.”

In India they’d call the dish biryani, and on the side you might find raita or chutney to cut through the fattiness. Here it’s served with fresh cucumber, pineapple and onion. If you want more kick add in some balachaung, a crunchy mix of fried onion, shrimp, garlic and chilli.

It’s customary to serve each meal with a light broth – at Sun’s it’s a sour concoction made from rosella leaves. Despite his 67 years, Aung still makes almost everything himself. He tells us he’s tired and ready to retire, but we get the sense he doesn’t want the restaurant and his legacy to end. He tells us his son isn’t interested in taking over, but we ask Erza his thoughts when Aung isn’t around. “Yeah I probably will,” he says.