A 50-year-old German restaurant with a 4000-bottle cellar and a killer pork knuckle. 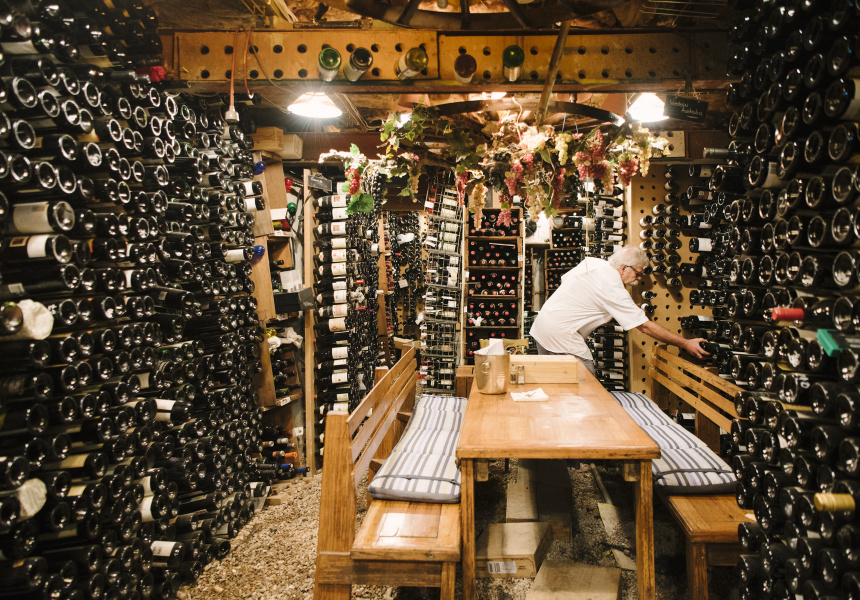 We’re sitting in Stuyvesant's House, an old German restaurant in Crows Nest. With us is Rudi Dietz who runs it with his brother Max, the chef. “I hear you’ve got some German wines here,” I say. Rudi is a brash fellow with a moustache so thick and curled it should belong to a circus ringmaster. “I have over 4000 bottles. I’ll show you,” he says.

We go down a steep set of stairs, a few lights are flicked on and we instantly see Rudi is far from joking. Underneath Stuyvesant's House is a labyrinth of gravelly tunnels each so tightly packed with dusty wine bottles it’s hard to navigate through them. Max points out some notable, very old bottles along the way before we arrive at what is probably the most unique dining room in Sydney. The room is essentially a cellar, the walls completely covered in bottles of wine. And there are two benches, a table, a large ornate bottle opener and a floor of gravel.

The Dietz brothers built all this themselves, a remarkable feat made more explicable when you know they’ve been running this joint since 1973 (they took it over from a Dutchman, hence the Dutch name, who opened it in ’61). “People always ask: ‘You’re brothers, how can you work together?’ Well, he's the gentile soul and I'm the dickhead,” says Rudi.

Upstairs it’s much livelier. The same customers who’ve been coming here for decades – many of them so friendly and relaxed they’re indistinguishable from the restaurant staff – are ordering some of the same dishes that appeared on Max’s first menu in 1975 (Rudi ran the restaurant for two years before he arrived). Dishes such as schweinshaxe (crisp-skin roasted pork knuckle with sauerkraut); seven kinds of schnitzel; several roasts; suckling pig; and schmalz-bauernbrot (rye bread with a lard-like spread). There’s even a few vestiges of the original owners; look for bitterballen (veal and chicken meatballs); schnapper zuiderzee (white-wine-poached snapper with lobster, oysters and hollandaise); and a small selection of Dutch-Indonesian dishes. "When you're on a good thing you stick to it,” Rudi says.

For many German customers here, though, the menu is largely irrelevant. Rudi says as long as there’s 48 hours’ notice, Max will make any German dish requested however regional or esoteric, even some Dutch ones. “We do everything. We do beef olives for a lady from Bayern [beef rolls filled with gherkins, onions and speck and braised in red wine]. Some people want konigsberger klopse (mixed-meat dumplings with caper sauce) or reistopf [rice with peas],” says Rudi. “Others call and ask for potato or bread dumplings, or bratkartoffeln [fried potatoes with a lot of onion]. We even make a Dutch-style bouillabaisse. The book is endless.”

This article first appeared on Broadsheet on November 22, 2017. Menu items may have changed since publication.