With five-person buckets of biryani for $9 per person. 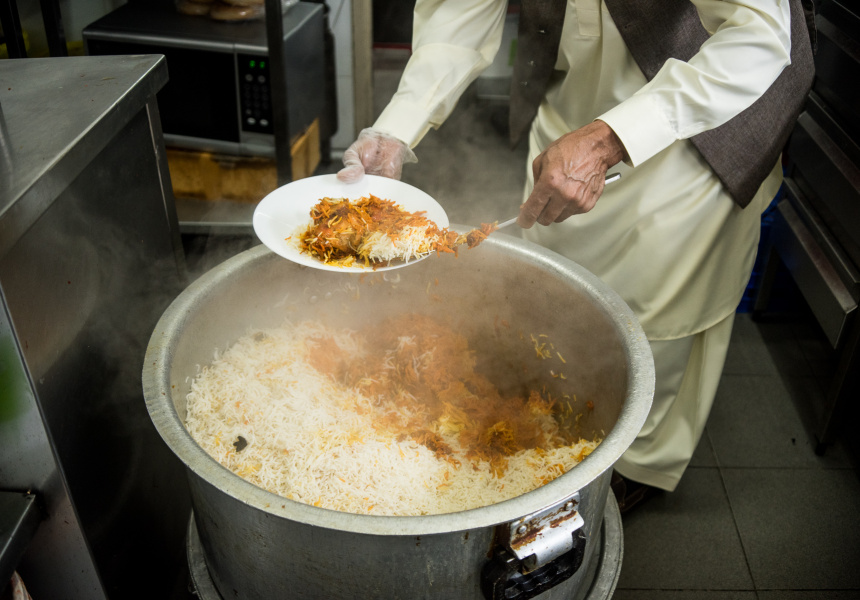 In Karachi, Pakistan in 1969, Muhammad Ali (not the boxer) opened a small street stall called The Cafe Student. It served biryani, some curries and Pakistani stews. He hoped the name would attract customers from the nearby university and high school. Luckily his biryani is bloody good, and it worked. Not long after the stall became known simply as Student Biryani. “When the biryani got famous people simply said, 'I'm going to student biryani’,” says Ali’s son, Muhammed Javed.

Now Ali’s sons (Ali has passed away) have Student Biryani restaurants in Pakistan, Canada, Oman, seven in the United Arab Emirates and, since 2015, Sydney. If you’re Pakistani or if you’ve been up the main road in Auburn on a Saturday night, no doubt you’ve been to Student Biryani. It’s outrageously popular. Some weekend nights rival Gelato Messina on a 35-degree Saturday afternoon for chaos. It’s certainly not because it’s a hip place to hang out; it has as much charm as most global chains. Student Biryani is popular for two reasons.

The first is simple: the serves here cost between $8 and $14 and are enormous; they’re so densely packed with hunks of meat and potato they could easily feed two people. The second reason is, unlike other chains, everything is made to order – the way you’d find chefs in Karachi doing it.

Each element is cooked separately and layered onto the plate. The final result may just look like a heap of rice, but it’s hiding rich, curry-like gravy; large chunks of chicken, goat or beef on the bone (the only way to do it according to Javed); and stewed potatoes. “Everyone eats it. Even in wedding ceremonies, the first thing you eat is biryani,” says Javed.

Almost every table at the restaurant will have a plate of it (or a bucket, if there’s a group). Big families will usually have side orders of beef nihari, a slow-cooked stew of bone marrow and beef; haleem, a thick lentil-and-beef stew with fresh coriander and green chilli; or queema (also called “keema”), a spicy minced-goat or beef dish made with kidney beans.

Kids will probably be eating burgers and fried chicken (Pakistan has its own fried- chicken called chargha). This one is marinated in spices and yoghurt and then steamed to soften the meat before it’s deep-fried for a brittle, golden skin and an earthy, spicy flavour. “I am not just the owner but also a chef. My father taught me this. All of the recipes are from family,” says Javed.

This article first appeared on Broadsheet on March 15, 2017. Menu items may have changed since publication. It was updated on October 9, 2020 to reflect price changes.