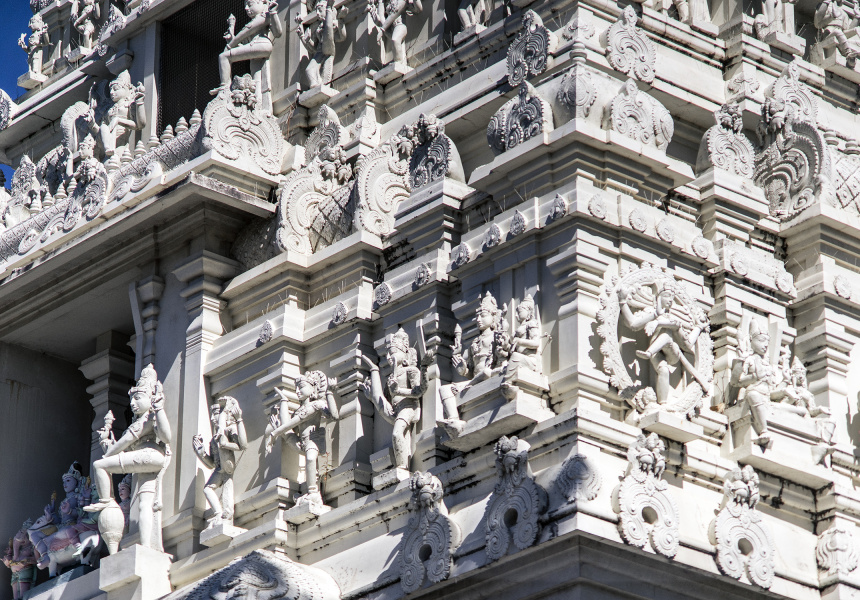 In 1978 a group of 17 friends got together and came up with a plan. “We had a view to build a Hindu temple,” says Nat'arajan Iyer, one of the 17. “At that time none of the metropolitan area councils would allow anything but a Christian place of worship. We didn't know what to do.” Until, Iyer says, one of the friends was near Helensburgh to see the Stanwell Tops hang-gliders. There, among the pristine bush, was a five-acre plot for $42,000 (a pretty significant sum in 1978).

The group split the cost and approached the mayor. “[It] was meant for a caravan park but he was very happy,” says Iyer. He used the words “Agama Sastras”, a great surprise and joy for Iyer coming from the non-Hindu mayor. It’s a Sanskrit word describing several Hindu principles, including the construction of temples. In 1985 the temple hosted its first consecration. It was a hugely significant moment for those friends and the community that had grown around them.

The only problem was Helensburgh was at the edge of Sydney. “I remember many years ago we had to get up early, it was a long route, two hours sometimes,” says Nama Namashivayam. There was nothing to eat in the area. “We'd either come here and rush back to eat food, or we'd cook and bring it here.” Namashivayam and his wife were among the few families who started bringing home-cooked food to the temple, originally for themselves, but then for the other worshippers as well. “It was whatever we could make, fried rice, idlis [a spongy South Indian breakfast cake made from fermented black lentils and rice]. People brought whatever they can. My wife would cook for 15 people.”

Each family brought their own speciality. “There was a big mix of food. In India there are 40 states with 40 cultures, minimum. We all brought different food,” Namashivayam says. The crowds grew and grew until eventually Namashivayam and the temple’s community decided it was time for something more permanent. In 2003 they opened the Sri Venkateswara Canteen doing just idlis, vada (crispy chickpea and potato doughnuts) and dosa.

Now every Saturday and Sunday hundreds of Sydney Hindus line up for the same idlis, vadas and dosa as well as paratha (a North Indian flat bread), tamarind rice, Indian sweets and masala tea. Each weekend they also have specials such as biryani, ven pongal (a risotto-like spiced-rice stew usually eaten for breakfast in India), puri (a puffy, deep-fried bread) and other sweets such as mysore pak (a fudge-like cake made from ghee, sugar and cardamom).

One advantage of running a canteen in Helensburgh is access to local produce. “One policy we have is that we do all the purchasing from local farms,” Namashivayam says. They’re also starting to have an impact on the nearby Helensburgh community. “Lots of locals are regulars,” he says. “We have no objections. This is an open place for anyone of any religion.”