Everyone’s here for the famous beef rendang, the chilli sauce and the bowls of rice and curry for $9.50. 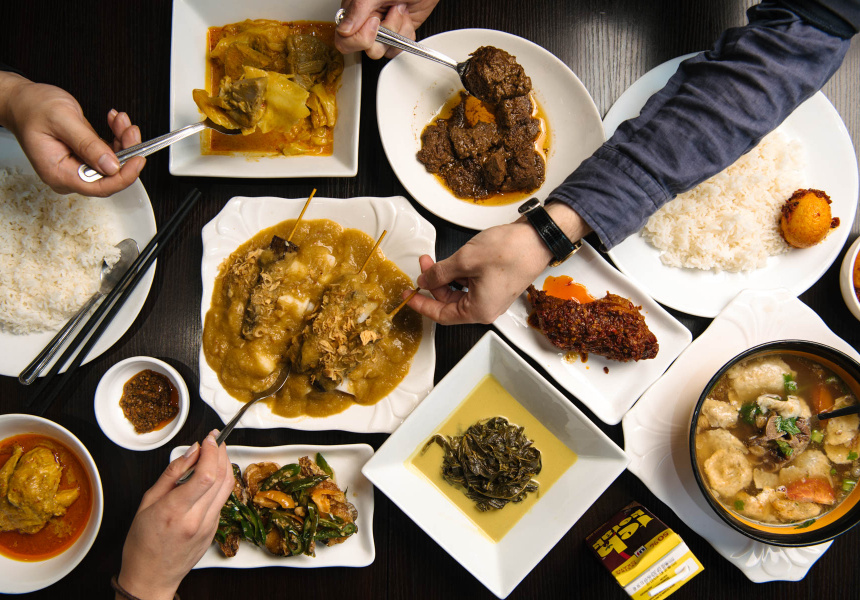 Lucia Jusuf never learned to cook. The Sedap Rasa chef’s training was in graphic design. Back in Indonesia, that’s what she did professionally, but after the 1998 riots, she left that life for Sydney.

In Sydney she figured she’d continue in the same field, but her lack of English created obstacles. While she was dealing with those challenges, she made Padang-style rendang (Padang is a city in west Sumatra), rice and sambal at home and divvied it out to her friends. Soon friends of friends were asking for it, and soon after people she didn’t know were requesting deliveries of rendang and Indonesian fried chicken. They kept asking when she was going to open a restaurant, so when she heard of an empty space on Anzac Parade in Kensington, she took it.

Jusuf and her family opened Sedap Rasa (which means “delicious taste”) in 2012, and they wanted the experience to be as similar to a Padang meal as possible. “In Padang, even if just you and I were eating, they would bring out about 20 plates and you just take whatever you want,” says Jusuf. The next people come in and do the same, usually eating with their hands.

Local council restrictions make that virtually impossible, so instead they set up a “hot bar” (a series of bain-maries). In it they served rendang, spicy fried chicken and daily specials such as fried mashed-potato patties, stewed beef lungs, yellow curry with tendons or, if the season was right, garlicky kangkong (water spinach). They had no expectation anyone would be interested, thinking maybe just a few of Jusuf’s old customers would come in. They were wrong – there were queues from the first day.

By the first afternoon they ran out of everything. “We sold out of rice. We know people across the road, we had to run to their place with an empty bucket. They were nice enough to give us some rice and told us to pay later,” says Makcel Jusuf, Lucia’s son.

When we ask them why so many people came and still come, they don’t seem to know exactly. It could be the rarity of their Padang-style cuisine – most Indonesian restaurants in Sydney serve Javanese food, which is sweeter. Padang dishes, by comparison, are far spicier, heavier on the coconut and more curry based.

There are very few places in Sydney you can get a rendang as coconutty and rich as Sedap Rasa’s. Nor are there many restaurants serving cassava-leaf curries, young jackfruit stewed with cabbage and potato, or a turmeric-based, peanut-free satay sauce poured over ox-tongue skewers and rice cakes.

Or maybe that doesn’t matter. Maybe it’s just the fact they do a great rendang, they’re a few blocks from a university and barely anything costs more $15. A nasi campur – the basic pick-what-you-want-over-rice deal – starts at $9.50.