Peruvian feasts of chargrilled chicken, ceviche and pisco sours in the backyard of a Peakhurst home. 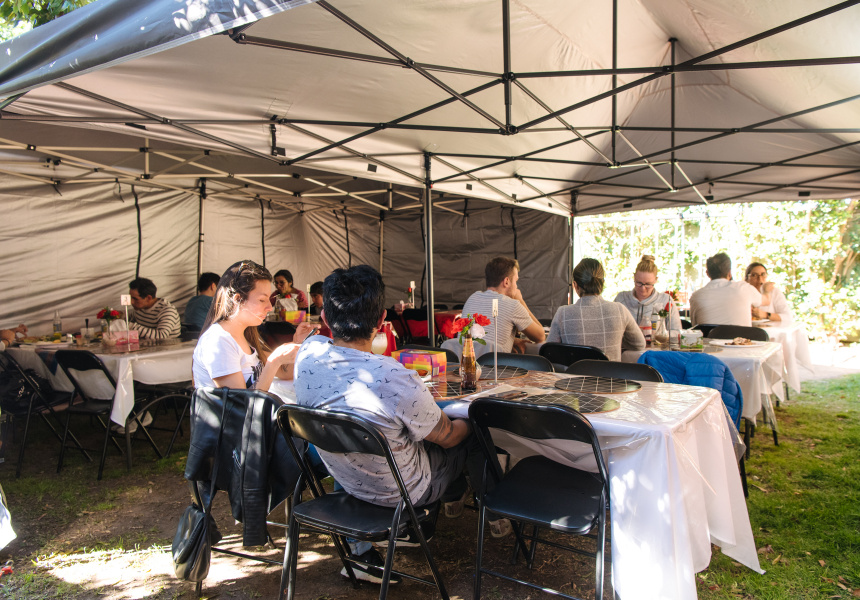 When we pull up at Sazon Peruana, it’s apparent this isn’t an average Peruvian eatery. We double-check the address. Yep, this is where it is. But it’s a brick home and there’s no sign differentiating it from the other houses. Inside it looks and feels like a regular suburban Peakhurst home, but it smells like simmering stockpots, barbeque meat and citrus.

Instead of the usual living room set-up, we find just a single couch with three Peruvians watching a Chilean news station. In the kitchen, four Peruvian women are curing fish for ceviche, stir-frying beef in a flaming wok to garnish tacu tacu (a slightly crunchy cake of beans and rice), and frying cassava (root vegetable) to serve with crisp calamari and huancaína (a garlicky, spiced cream sauce).

We’re standing there thinking: where do we fit into all this? Then we see the backyard. The lawn is covered with tables (many of them surrounded by families) full of hefty plates of bronze-skinned charcoal chicken, and Peruvian beers or pisco sours. Everyone looks like they’re having a great time.

A couple months ago we were told the best and maybe only place to get home-style Peruvian food in Sydney is at Sazon Peruana, in Sydney’s south. But we heard it wasn't a restaurant – just someone’s house. Now we know what they mean.

Paul Cusinga and Danith Montoya started the venture in 2016, three years after they arrived from Peru. They hadn’t intended to get into the food business, but one day a group of Cusinga’s friends asked Montoya if she’d cook for them. It was after a soccer game and they were craving Peru’s national dish, ceviche (raw fish cured in a mix of lemon, coriander, garlic and chilli, topped with a splash of fish stock). “It was just a [joke],” explains Montoya. “‘Will you cook ceviche for us Dani?’ I said, ‘Yeah, why not?’”

The soccer-players told their friends and it became a tradition. Soon the couple were doing takeaways, and not long after that, hosting strangers in their house. Now they’re full almost every Sunday and Montoya has an entire team of Peruvian-Australians to help her prepare more than 30 dishes.

Although Cusinga and Montoya laugh about how they accidentally fell into cooking, when they talk about Peruvian cuisine it seems like they were destined for it. They’re incredibly proud – proud to be giving Sydney Peruvians a taste of their home country, and proud to be sharing what they feel should be an internationally renowned cuisine. “If you ask any Peruvian what is the most important thing in your country, they used to say Machu Picchu, but now they say food,” says Cusinga.

He describes the food as a mix of cultures and cuisines. The Spanish introduced beef; other Europeans introduced stews and dairy; Afro-Peruvians popularised rice and beans, mixing those ingredients with everything else (the origins of tacu tacu); the Chinese introduced ginger, wok-cooking and noodles; and with the Italians came pasta, basil and more ingredients. All of these groups added their foods to the established, diverse mix of ingredients and culinary traditions of Peru’s many indigenous peoples.

The couple try to change the menu to reflect Peru’s diversity, but it’s impossible to keep up with the requests they receive. Their end goal is to open a restaurant with much more scope, but – to be honest – we’ll be sad when the original Peakhurst location closes. There are few places in Sydney as genuine and as utterly relaxed as Cusinga and Montoya’s home.

“This isn’t only a place for food. This is for families. It’s about the environment. It should feel like [your] home,” says Montoya.

Sazon Peruana is hosted by Paul Cusinga and Danith Montoya in their home but has been suspended for the time being.