A traditional Turkish bakery specialising in the Mediterranean’s most popular snack. 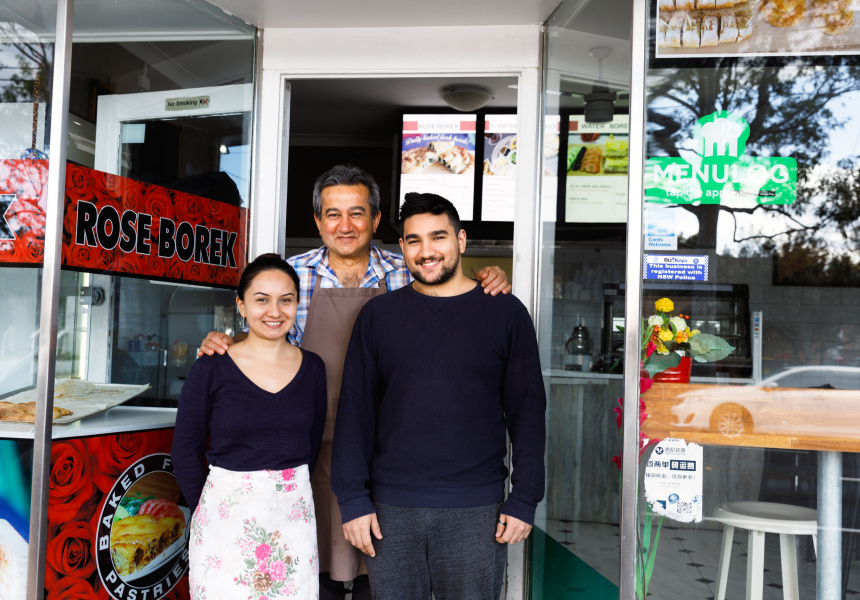 When Sergun Ozsoy settled in Sydney in 1984 there was one food he couldn’t find from his home, Turkey: borek. It’s a flaky pastry generally stuffed with minced meat, or spinach and soft cheese. Sometimes it’s baked into a twirled log. Or it can come in a pide-like shape, or in lasagne-like square.

In Turkey it’s hugely popular, comparable to pho in Vietnam or croissants in France. There it’s a common breakfast food, snack and an occasional festive meal, too.

There were some people making the Crete-style boureki, or Macedonian burek, but Ozsoy wanted the Turkish version. “They're all made a little bit different. The [other] pastries are too oily. Ours is light.” That’s why he opened Rose Borek, a bakery and cafe in Rosebery he now runs with his partner Mensure and three children, Ezgi, Ozan and Sukran.

It sounds radical – wanting to eat something enough to start a business selling it – but it wasn’t a totally ridiculous thing for Ozsoy to do. He was a chef in Sydney (at Anadolu Pizza) and in Turkey, where he owned a restaurant that served mezze, pide and Turkish pizza.

He and his family make all the pastries by hand. A good borek, which is demanding to make, should be visibly layered, soft in the centre but brittle, like a freshly baked croissant, at the edge. To get this effect, each layer needs to be rolled and stretched so it’s translucently thin. Once layered and stuffed, it’s shaped into a metal pan and baked.

The dough is made with flour, salt and water, but Ozsoy says there’s another secret ingredient that differentiates Turkish borek from its regional cousins. We try to tease it out of him, but he doesn’t give an inch. “Lots of people have tried,” he says, laughing.

He’s happy to share the other recipes, though. He tells us the secret to a good simit – a halo-shaped pretzel-like bread encrusted in sesame seeds – is to boil it in a grape-molasses solution before baking. “That's important, it gives it colour and taste; [it’s] a little bit sweet and crunchy. This is the original way to make simit,” says Ozsoy.

Just like in Turkey, here you buy the borek cut from the loaf, either a quarter, a half or you can take a whole. On weekend mornings you can enjoy it as part of a $25 traditional breakfast spread of Turkish tea, eggs baked with sucuk (a dry, spiced beef sausage), soft cheeses, nuts, olives, fresh fruit, tomato and cucumber, as well as simit and pogaca (a soft Turkish bun that can be stuffed with anything, sweet or savoury) alongside jams, cream and honey.

This article first appeared on Broadsheet on September 19, 2018. Menu items may have changed since publication.