Join people from Northern Thailand eating the food of their childhood. 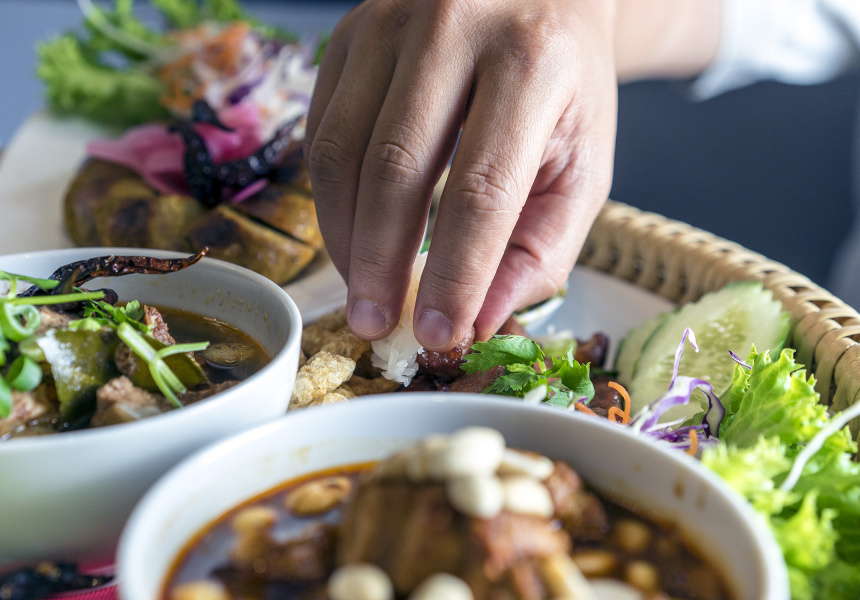 Thailand has four regions: South, Central, North East (Isan) and North. Each has its own cuisines, ingredients, recipes and traditions. Most of the Thai food we get in Sydney is a hodgepodge of these, with a tilt towards Central (the area around Bangkok), and is traditionally upper-class food (royal or upper class food is much more readily available in Thailand now). The owner of Rim Tanon, Thidarat Ng, is a Lanna Thai, a distinct cultural group from Northern Thailand. She grew up eating nam ngiao (fermented rice noodles) and a cuisine made up of other dishes most Sydneysiders, and even some Thais, haven’t heard of.

Ng used to own Chilli Cha Cha, a more generic restaurant in the same Campbell Street space. After meeting another chef from rural Northern Thailand, she was inspired to cook more of the food she wanted to eat, alongside more familiar Thai dishes. Northern food is rare in Sydney, and Rim Tanon is the only Thai restaurant seriously specialising in the cuisine. “Chang Mai food is even rare in Bangkok,” says Ng’s son and Rim Tanon manager, Ben Ng. The two most recognisable dishes are khao niaw (sticky rice, which is the staple of the region), and larb, (minced-pork salad found on menus throughout Thaitown). The northern version is a bit different; it’s drier, less sour, spicier and more textural from the addition of liver, tripe and fresh herbs.

You can tell which of Rim Tanon’s customers are northerners by what they order. They’re the only ones eating kamon jeen nam ngaio. The aforementioned fermented rice noodles – white, long and jelly-soft. They’re also found in the South, but add a soup of pork, blood jelly, fermented soy beans and roasted chilies and it becomes exclusively northern. Usually it’s served like pho is here, with sides of pork crackling, bean sprouts, preserved vegetables, chillies and fresh herbs for dipping, adding or snacking on.

The most traditional way to eat northern style would be with a khantoke, a small thatched platter that serves various kinds of Thai curries, relishes, northern-style sausages, fresh herbs and grilled or fried meat dishes. “It’s eaten with sticky rice. It’s how old Lanna people ate.” says Ng. When Thai New Year kicks off in mid-April, Rim Tanon will serve its own khantoke along with a brand new Northern-focused menu.