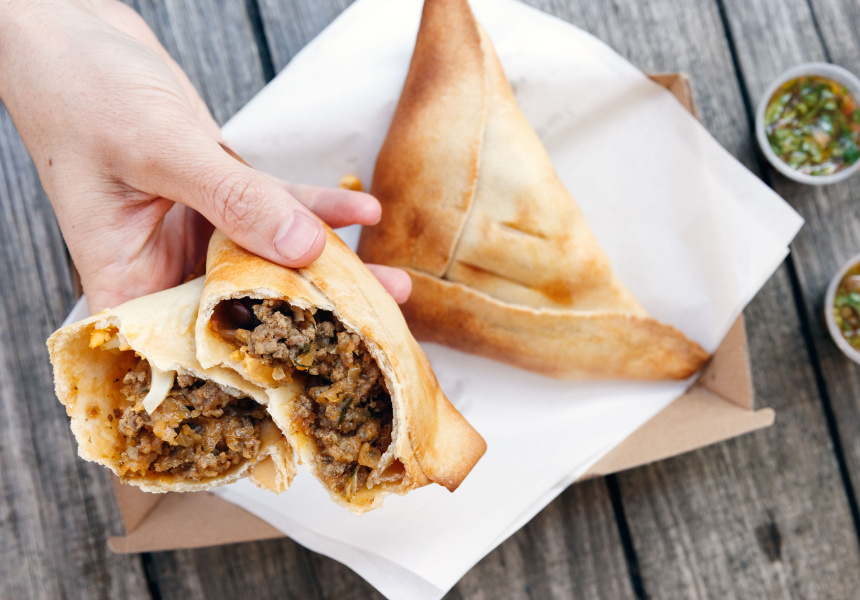 Thirty-one years ago Patricia Bustamante, a recent migrant from Chile, opened her first market stall in Sydney. It was at a community fair and she was selling handmade empanadas, some fried and filled with hot, stretchy cheese, others baked and stuffed with beef, boiled egg and gravy. She’d been cooking empanadas and other Chilean goods for Sydney’s Spanish-speaking community, but this was her first time cooking for the public.

It wasn’t successful. Hardly anyone paid attention to her stall and she went home with almost as many empanadas as she’d made. “She was heartbroken,” says her daughter Paulina Bustamante. “She worked in a factory at the time, she’d invested a lot.”

Five years ago she opened her second stall at Ramsgate Foodies and Farmers Market. She was selling the same product and Paulina was helping her out. “We were so nervous, we didn’t even know how to put the marquee up,” says Paulina. “We were so happy with every sale we had. We were giving each other high fives with every customer; we couldn't believe people were buying it.”

By 11am they’d sold out, and it wasn’t just the Chilean community buying, either. “It was great for mum. She always knew she could cook, but seeing not just Chilean people, but other people buying her food and enjoying it – it was an a-ha moment for mum.”

And the Chileans who did come wanted more.

A few weeks later Patricia and Paulina added two more of Chile’s most popular street-food orders to their repertoire: churrasco (roast pork) and lomito (steak) sandwiches. Both sandwiches come with the Chilean holy trinity of sandwich fillings (tomato, mayo and avocado) and pebre, a coriander, tomato, onion, garlic and chilli-oil salsa (in Chile it’s served with everything). And it’s not a smear or a buttering of avocado either, says Paulina, but a lathering – enough for it to surge out of the side of your sandwich as you take a hefty bite.

There’s one thing you need to know before you embark on a meal here – Chilean food is massive. If you’re planning to plough through a sandwich, an empanada and an alfajor, just wait until you can assess the size. Not only are the empanadas blessed with the girth of a pie and length of a sausage roll, they’re also immensely doughy and absolutely crammed with fillings (whether it’s Granny Smith apples, cream and cinnamon; garlic, prawn and chilli; or four different kinds of cheese).

This is another edition of Broadsheet’s "Local Knowledge" weekly series, where Nick Jordan explores the eateries at the heart of Sydney’s different cultural communities. Read more here.