Peranakan cuisine is one of the rarest in Sydney. One of two places in Sydney that serves it, Peranakan Place is in Auburn. 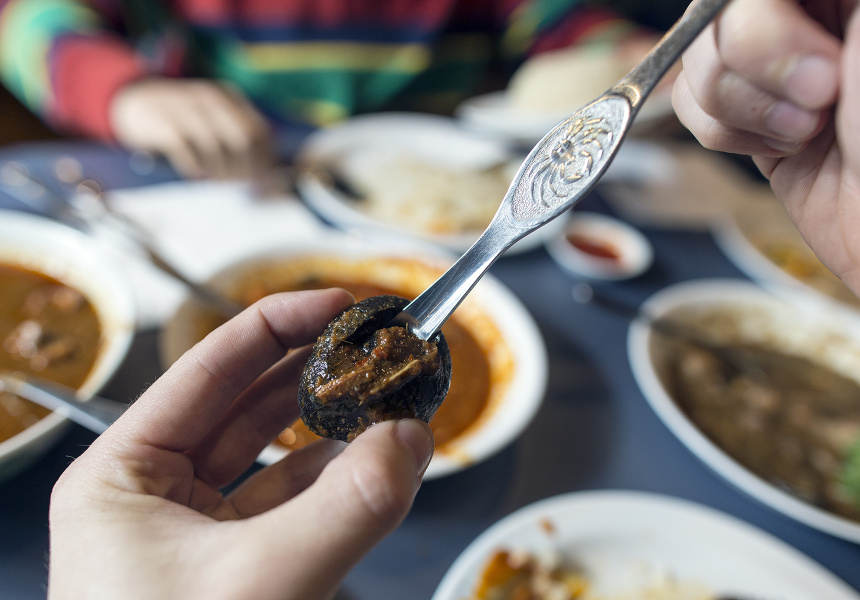 “Most people in Singapore and Malaysian have never eaten, seen or heard of this.” Sam Wong is talking about bua keluak, a poisonous nut that grows in South East Asian swamps. When cooked properly (to remove any trace of hydrogen cyanide) they produce a rich black flesh, quite unlike anything we’ve ever tasted. The nuts themselves look like wrinkly chestnuts. Inside there’s a pâté-textured flesh that’s rich, savoury and bitter like a combination of Kalamata olives, shiitake mushrooms and hazelnut skins. “It's only for Peranakan people. For us, it’s the holy grail.”

Wong, or Uncle Sam as his customers affectionately call him, owns Peranakan Place, one of only two restaurants in Sydney specialising in Peranakan food (also known as nonya), a cuisine formed by a history of Chinese and Malay intermarriages in Malaysia, Singapore and Indonesia. While it would be easy to say the culture is a mixture of Malay and Chinese traditions, it isn’t. It’s remarkably distinct, and that’s reflected in the cuisine.

The ayam buah keluak is a rich and slightly bitter chicken curry made with keluak nuts. It’s a made over several days by Wong’s wife, Agnes Wong. First, the whole nuts are soaked for several days. Then they’re cracked open and hollowed out. Each nut is deseeded and its flesh is ground into a paste. Half the paste is used in the curry and the other half is seasoned and stuffed back into the whole nuts, which are then stewed with the curry. You’ll be given a crab-pick-like utensil to shovel the nut’s meat from its shell.

Most of the dishes require a similar level of preparation. “Everything is made in-house, even our curry. We blend it ourselves.” Wong and his wife aren’t in this for business, this is a passion project. “I had been trying to locate nonya food over the whole of Australia, but I could not find anything that was really genuine. We started this to give the public the true authentic nonya taste.”

Babi pongteh, a thick curry with tender pig trotters, shiitake mushrooms and chestnuts, is one of their family recipes. It’s savoury, thick and textured from the chewy mushrooms and doughy nuts. Both the babi pongteh and the ayam buah keluak are rich dishes, particularly when eaten over coconut or chicken rice, but like all Peranakan dishes, they’re not meant to be eaten alone. On every traditional Peranakan table you’ll find three things: sambal, lime and achar, a tangy and crunchy side dish of pickled vegetables, roasted sesame seeds and toasted coconut.

For dessert try the sage pudding or sweet glutinous black rice with salted coconut milk. Nonya tradition says to keep it unmixed so the balance of sweet and salty is perfect with every bite.