Top marks for serving some of the best Malaysian in Sydney – all day. Over the life of the Local Knowledge column, we’ve heard a lot of restaurateurs tell impactful stories. There’s been tales of escaping war, dealing with the hardships of immigration and belonging, and inspirational accounts of building families and communities. The story behind Penang Hawker is less complicated.

Jenny Tan couldn’t find a Malaysian restaurant in Sydney she liked, so she opened one.

Tan is from Penang, a region famous (even within Malaysia) for having some of the best food on planet earth, but also being home to the most fervent food lovers. Tan is one of them. Unfortunately for her though, she can’t cook. Eating Malaysian food in Sydney meant eating out – that’s how her restaurant plan came into fruition. Tan recruited her friend Vincent Chew and together (despite neither of them having any experience) they opened Penang Hawker with the plan to be “really, really traditional, old style. No Aussie style.”

The most important dish to get right is char kway teow, a wok-fried flat noodle that’s smoky and hearty from being fried in pork fat at an extremely high heat. Penang cuisine puritans might shame the dish for having no blood cockles (a common island). But you only need to look as far as the number of tables around us devouring the noodles to understand customers are too focused on the $11.80 price tag, the sheer size of the dish, and its richness to care. If you want to luxe it up, like many innovative Penang hawker stalls do, pay an extra $2 to have it ribboned with duck egg.

Tan and Chew are both Chinese-Malaysian (Malaysia is made up of three main ethnic groups and cuisines – Malay, Indian and Chinese). This restaurant is half designed around what Tan wants to eat, while the other half covers the kind of classic Chinese-Malaysian fare you’d find in any Penang hawker market: noodles; stir-fried radish cakes; bak kut the (a clear pork broth served with islands of pork ribs); and clay-pot chicken rice (exactly what it sounds like but add minced pork and Chinese mushrooms).

One of the exceptions is fish-head curry, which is an Indian-Malaysian tradition that sees snapper (though they use king fish here) heads stewed in a yellow curry with tomato and okra. It’s kind of laska-ish in taste but it’s thicker, fishier and generally stronger.

To ensure the Penang-style of cooking is strictly upheld, Tan imported as many goods as she could from home – curry powders, sauces, noodles, tea and more. “There are many Malaysians in Sydney that are lonely. My goal is to make them feel better, feel like they've come back from Malaysia,” she says. It seems to have worked, too. Despite opening next to Albee’s Kitchen, probably the most popular Malaysian restaurant in Sydney, the first few weeks here saw queues out the door, which didn’t dissipate on weekends. From 7am till close, getting a table can be a tricky jostle. And that’s just at lunch and dinner – you should see it at 6am during the breakfast buffet. 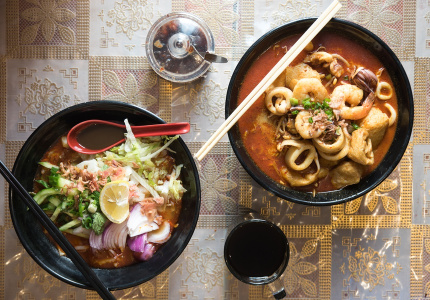 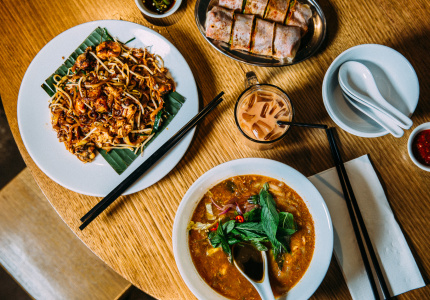