This traditional Italian pasticceria in Five Dock is where the Italians go. 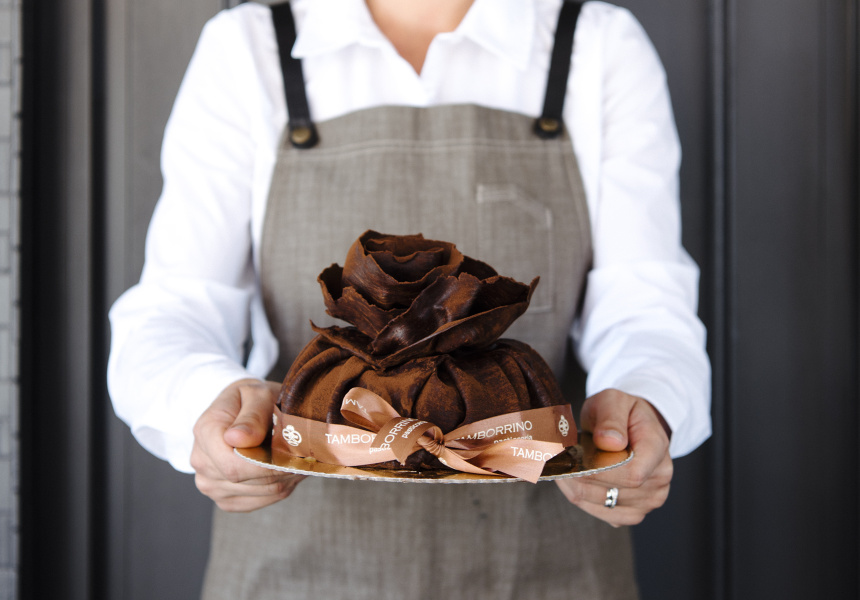 Pasticceria Tamborrino. Tuesday morning, 11am and it’s packed. The outside tables are crammed with people and empty plates but for a few flaked crumbs. There’s a table of cyclists each with a mug of coffee and inside, the counter is just as busy, with cannoli, flaky ricotta-filled pastries and Italian doughnuts being served to a steady stream of elderly Italians.

It’s busy at a time when every other Five Dock venue is quiet. Vincenzo and Cristina Tamborrino could easily have twice the space and make double the money – and they once did. “We had a bigger shop next door; it was two stories, but we're happy with this. Instead of getting larger we wanted to get smaller,” Cristina says.

That was the only way they could keep their product perfectly consistent and of a high quality. “This is not an industrial type of business; we make everything by hand,” says Cristina before scuttling off to return with a chocolate cake to reiterate her point. It’s encased in a shell textured like the folds of a rumpled silk sheet. “The bigger [the] operation, you have to cut corners. Some details you just can't get if you have an industrial level of production.”

It’s this attitude that has given them such a high standing in the local community. Among Italians in the area it’s considered one of the best, if not the best, pasticceria in Sydney. And they say this despite the fact Vincenzo and Cristina are Roman. Sydney’s Italian population is historically dominated by southerners – people who grew up with very different pastries to the ones the duo create. “It was hard at the start [they opened in 2002], they were expecting cakes from the south. It was hard to get them to accept,” says Cristina.

Rome is famous for its biscuits; among them the lingue di gatto, a simple biscuit shaped like a cat’s tongue (the name literally means cat’s tongue). There’s also mignon, a style of tiny pastries (including some copies of larger pastries and some unique creations), the most popular being the aragosta, or the lobster’s tail – a brittle pastry filled with Chantilly cream.

That’s not to be confused with the sfogliatella (often called a lobster tail in the United States), a similarly textured pastry filled with ricotta, which comes from the Naples region. Cristina and Vincenzo also sell it, along with cannoli and babas (little doughy yeasted cakes soaked in syrup or rum), pastries and other sweets with southern origins. The couple don’t want Tamborrino to be Rome specific – they’re more interested in providing variety and consistency.

But one of the most popular orders is also the most generic of Italian breakfasts – coffee and a croissant. These aren’t like the French variety; they’re made with less butter but more sugar, so are sweeter and more dense. They come stuffed with cream, custard or ricotta, depending where you’re from, of course.

This article first appeared on Broadsheet on September 26, 2018. Menu items may have changed since publication.