Everything’s laid out on the table – no plates, no cutlery. Just fight for what you want. 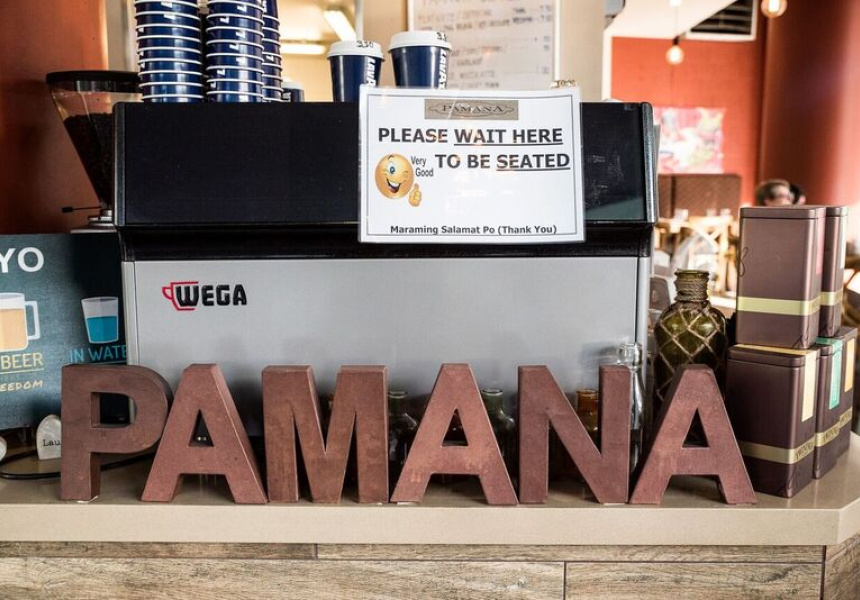 There’s a tradition in the Filipino military called the “boodle fight” (the term most likely originated from US soldiers during World War Two). The idea is to cover a table in banana leaves and then lay all the food out in the centre. There are no plates or cutlery, just a mound of food. That’s where the fight part comes in; you have to dive in and grab the best bits before others do. This way of eating is mostly exclusive to the Philippines, but there is one restaurant in Sydney known for it, Pamana in Chatswood.

This is what it’s like: the table is covered in banana leaves, but a minute later the leaves are barely visible; grilled seafood, roast meats and various stews and rice dishes are laid out like a banquet. People look around for spoons and forks. After a confused moment one guy tentatively grabs a hunk of crispy pork, another shrugs and claws at a stringy plate of greens. Then people start tearing crab legs, ripping at squid legs and handing each other morsels of grilled meats. People are talking, laughing, yelling and generally eating absurd amounts of food.

“I love people leaving here holding their stomachs,” jokes Pamana’s owner, Pen Esquivel-Henderson. That’s the normal state of affairs here. The Thursday and Sunday boodle fights are enormously popular. They’re probably the reason the restaurant has such a strong following in Sydney’s Filipino community. The other reason is the home-style quality of the food. “All the dishes are my mum's. Hence the name ‘Panama’, that means legacy.

These dishes are transferred from generation to generation,” she says. “The people who come here like the food because it’s like their mum and dad’s.”

Esquivel-Henderson’s family is from the north of the Philippines, where the cuisine has a big Spanish influence. She talks about growing up on her mum’s caldareta, a thick tomato-and-beef stew with potatoes and capsicum. That may be her favourite, but her customers would vote for the crispy pata. “It's pork hock boiled for four hours in seasoned water, then refrigerated and deep-fried,” she says. Cooling it before deep-frying creates a crackling-like layer of skin. Like many dishes in the Filipino cuisine, it’s fatty but incredibly fulfilling because of it.

To offset the heavier dishes, the tradition is to add vinegar. In this case, it’s the vinegar from Esquivel-Henderson’s grocery store, Manilla Sari Sari. “All the ingredients we get from there; we want to use all authentic Filipino ingredients.” It’s part of Esquivel-Henderson’s overall philosophy: make it as much like home as possible. “Filipinos are very well known for hospitality,” she says. “That’s what I tell the staff. This should be like coming into your house. It should always feel welcoming.”