This Sutherland restaurant is one of the only places to find Greek “auntie food”. 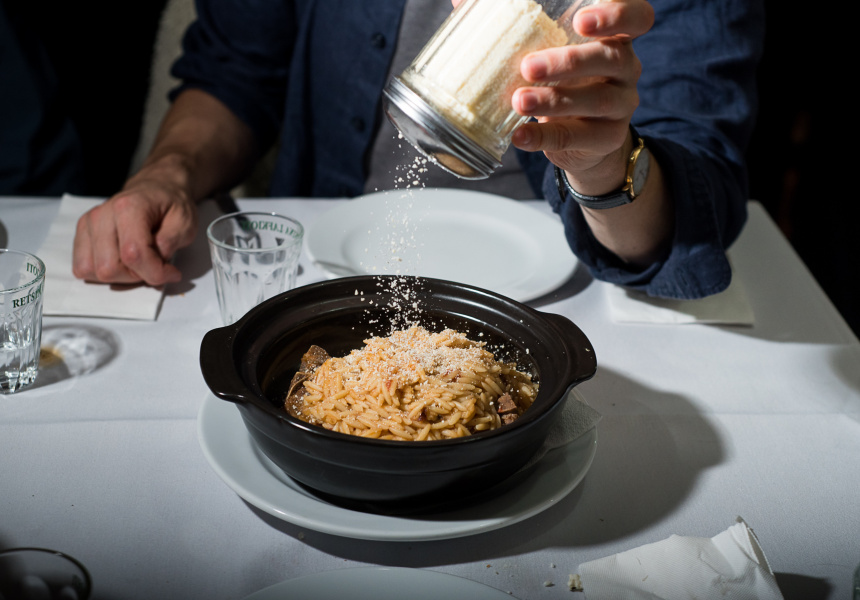 It’s 9pm and there’s a 71-year-old man with a tray of ouzo shots flitting between tables like a raffle salesman. At each table he stops, the tray goes down and each of the glistening shot glasses are handed out. All but one that is, the last shot he saves for himself. “Yamas!” he says and down it goes. As far as 71-year-olds go, he seems pretty much invincible.

His name is Yanni Hatzikiriakos, and he’s been doing this for more than 40 years. His first stop (after slogging it out in a milk bar from age 13) was Marrickville’s famous rotisserie restaurant Corinthians, a place he owned with his brother in the ’70s. After flirtations with the north shore and the south west he eventually settled in the Shire with Greek Islands Taverna (a restaurant he first started in Earlwood more than 25 years ago).

In the Greek community he’s famous, not necessarily for his antics (although we’re sure that helps) but for making food “like an auntie”. Oddly, despite Sydney’s great number of Greek restaurants, so-called auntie food is rare outside the home.

What does that actually mean? Two things. The first is almost everything is made by hand (like in most Greek homes several decades ago). Spanakopita (little triangles of pastry filled with spinach and cheese) pastry is rolled every morning by Yanni and his wife. Even labour-intensive desserts like bourekakia (a flaky semolina-custard-filled pastry fried and drizzled in syrup and cinnamon) and bougatsa (a baked filo pastry roll stuffed with custard) are made by hand before each service. “It's me, my wife and my son in the kitchen cooking. It's very old school,” Yanni says while pointing to his grandsons working the floor.

The other requirement for the “auntie” tag is the kind of dishes served. There aren’t many restaurants in Sydney where you’d find mezedes (shared appetisers) like sikotakia (soft pan-fried chicken livers dressed in oregano and lemon), lukankia (Greek sausages) and kolokithakia (zucchini fritters served with blended potato and garlic).

The hallmarks of Sydney Greek food are still popular orders: seafood platters and heaped plates of lamb. But just as many patrons come for Yanni’s five-cheese moussaka; lemony chargrilled quails; or slow-cooked lamb casserole with okra or kritharaki (tiny rice-shaped beads of pasta). “[Okra] is very traditional. It's very common in Greece but here it's not on many menus because it's too hard,” Yanni says.

Of course, all of this is a big strain on the Hatzikiriakos family, particularly when the place is so busy, but Yanni is unflinching. “I've worked very hard in my life but I've enjoyed working in a restaurant because I like what I do and I like to see happy customers. I also never get tired, even when it gets busy.”