Across more than 100 instalments of Local Knowledge we’ve noticed a pattern: Indian and Bangladeshi restaurateurs coming to Sydney as students and opening restaurants because there weren’t any that, according to them, served the authentic stuff. There have also been many stories of home chefs encouraged by their friends and the wider community to go pro.

This is not one of either of those stories. Trung Ly came to Australia a successful businessman. In Vietnam he is known as the “franchise king” and the founder of Pho 24, a chain Ly describes as the McDonald’s of Vietnamese street food. He sold the entire business and came to Sydney to spend time with his kids. But, like many accustomed to a life in hospitality, Ly got restless. “It was a beautiful time but I realised I couldn’t retire. I missed something.”

The cure was to open another restaurant, which is how Nang came to be.

Most of Nang’s recipes come from a cookbook Ly’s wife, Mai Nguyen (Nang’s head chef), received from his grandma. The book has tips on how to make rural specialities and the dishes Ly’s grandma made at home.

One of the home dishes is a clay pot-style caramelised fish. It is a sticky, salty and herby salmon stew spiked with a brown-sugar caramel. The more-rural recipes are best represented by Nang’s goat curry.

The rest of the menu is mostly Southern Vietnamese cuisine: Vietnamese pancakes, tangy salads, lemongrass-heavy stir-fries and pho. Ly says the pho is like what he served at Pho 24 (heavy on the beef but still herby) but better because of the quality of Australian meat.

If that’s all people order, though, Ly will be disappointed “There’s this perception that Vietnamese food is just street food: delicious and inexpensive, always casual,” he says.

That’s why he serves rural curries and clay pots, and that’s why the restaurant looks more like a French Colonial villa than a typical Vietnamese restaurant. It’s all wooden, ornate and filled with luxurious touches imported from Vietnam. The most obvious is the intricate floor tiling and custom-built lanterns. “A lot of my customers come in and say, ‘Wow, is this a Vietnamese restaurant?’ I love that. I want to change people's ideas,” says Ly. 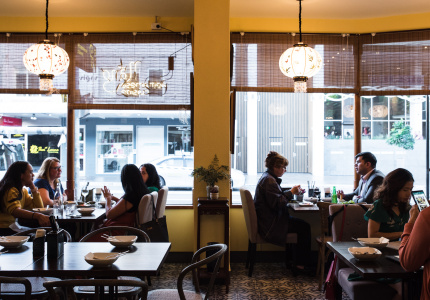