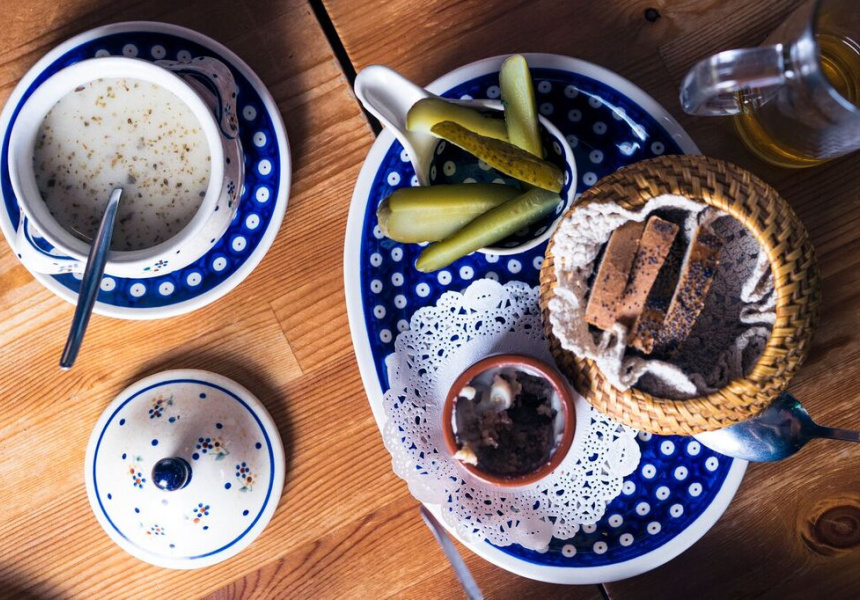 Nine years ago there weren't any Polish restaurants in Sydney. Arek Kwasnica and Bart Langawski, two Polish men with a hospitality history, decided to change that. “There was only Polish clubs. You have Thai, Czech restaurants, every nationality had their own restaurant. But not Polish,” says Kwasnica.

In 2007 they opened Na Zdrowie with friend Glen Limond. They wanted to show Sydney Polish food, but they didn’t know all the recipes. So they asked the most knowledgeable and skillful chefs they knew, their mums. “They came here from Poland to help us for three weeks,” Kwasnica laughs. “It was good fun for them.”

Traditionally, Polish dinners start with soup. The most recognisable of which is barszcz (similar to Ukrainian borsch), a beetroot-based soup served with either dumplings or croquettes. Then there’s flaczki with tripe, pepper, ginger and marjoram. Zurek is a sour milky-looking, fermented-rye broth with potato and smoked pork sausage. “Polish cuisine is about cabbage, potatoes, pork and beetroot,” says Kwasnica.

After soup, or perhaps during, you have sides of generously stuffed dumplings with cheese and onion, mushroom or pork (pierogi); fried camembert (serek); herring or rye bread with pickled cucumbers; or rye bread with a spread consisting of lard, onion, apple and pork mince (smalec). Kwasnica says when they first opened, Limond convinced them no Australians would ever order lard, but the Polish customers kept asking for it and it’s been popular, even as a dessert, ever since. "If you don't put oil in the door it's not working properly, but if you put oil on it's working perfectly. It's the same with your body. You need some fat,” he says.

Mains are about meat. Roast ducks with apples; smoked meat and sauerkraut stew (bigos) and schabowy, pork-loin schnitzel with a finely sliced cucumber and sour cream salad (mizeria). Because the mains are generally heavy – to withstand brutal Polish winters – sides such as mizeria, sauerkraut or marchewka, a mix of grated carrot and apple, provide contrasting sour or sweet flavours.

The other great Polish winter defence is, of course, alcohol. Kwasnica is proud of Poland’s reputation for producing high-quality spirits, and he’s stocked Na Zdrowie with a descriptive three-page list of vodkas, including varieties with Polish raspberries; wild-harvested honey; and vodka made with plum, rye or bison grass. “We want to make you feel like you're in Poland. You just open the door and already feel like you’re in a different place,” says Kwasnica. With wooden columns, cut–outs of Polish art and pictures of the country’s past, that’s exactly how it feels – like walking into a neighbourhood tavern or the living room of a Polish village home.