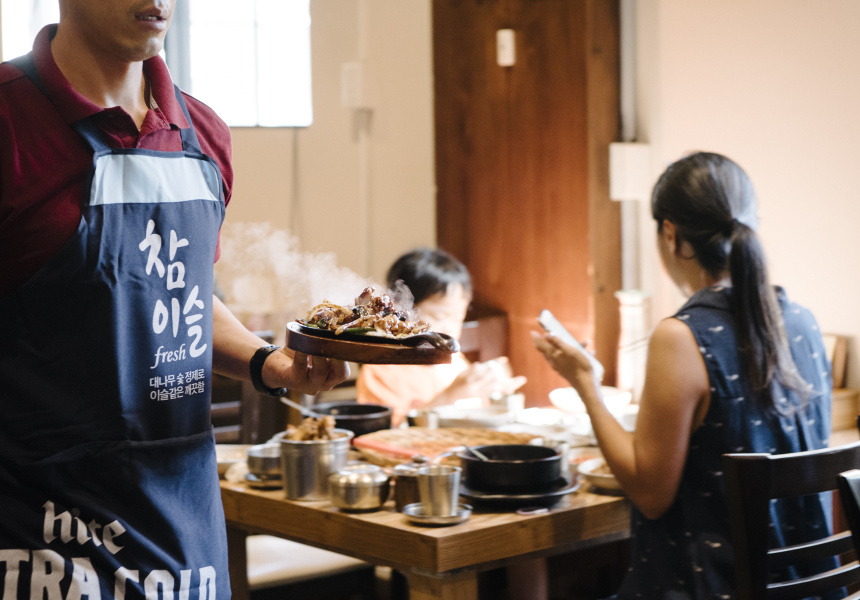 We’ve just sat down at Myeong Dong, a relatively new Korean restaurant in North Strathfield. The two guys next to us have ordered a kimchi stew and a seafood pancake; neither dish has arrived, but their table already looks like they’re eating a banquet.

Most Korean restaurants will send out a few plates of free kimchi and pickled radish – it’s Korean tradition – but this table doesn’t just have a plate of pickled cabbage and some garden salad greens, it’s at another level completely.

Myeong Dong has 12 banchan (the collective name for Korean side dishes), including soft and sweet soy-dressed potatoes; spicy cured octopus; cubes of semi-translucent chestnut jelly; long noodle-like strands of fish cakes; pickled zucchini; slices of sweet lotus root; and some of the spiciest kimchi in Sydney.

This extraordinary array of colours, textures and fermentation techniques isn’t normal for this city, or for Korea for that matter. Traditionally, that kind of table-colonising spread has been reserved for Korea’s fine-dining establishments and the old-money aristocracy, as well as one province: Jeolla-do, which is where Jung Ok Park comes from.

Park is the owner and head chef of Myeong Dong. Previously she ran another locally famous restaurant, Jonga Jip in Eastwood. It was loved by both the Korean community and those outside of it, but as Park’s clientele shifted from predominantly Korean, people began to request food to taste less and less Korean, meaning less spicy, less sour and less pungent – and she ended up selling.

Park’s goal here is to serve Korean food without compromise, the same way she learned from her mother and grandmother in Jeolla-do. Crucial to that is the banchan, which Park painstakingly prepares at least daily. When we ask her how it’s possible to make money when she’s giving away so much food for free, her answer is volume (Park was interviewed via a translator). When Broadsheet eats Saturday lunch here, the restaurant is as lively and densely packed as a yum-cha sitting during Lunar New Year.

Unlike her previous restaurants, Jonga Jip and Hornsby’s Kangnam, there’s no barbeque at Myeong Dong. Except for the banchan, it doesn’t really have a speciality at all. Instead, it serves Korean dishes – such as bibimbap; fried chicken; bossam (a DIY san choy bow-like dish centred around pork belly that’s been boiled in a complex, herbal soup); haejang-guk (various soups thought to cure hangovers); seafood pancakes; bulgogi; and hot pots – many of which are radically different to other Sydney versions because of Park’s no compromise attitude.

Park’s tender pork-rib soup – one of the most popular dishes here – is unusually spicy, while the seafood pancake is surprisingly stuffed with hefty chunks of shallots and octopus. The bossam platter includes blanched perilla leaves, which is uncommon to see in Sydney, along with pickled radish, raw oysters and a wildly powerful ssamjang (a spicy paste made from fermented chillies and soybeans). Including just the oysters is radical on its own, but the combination of all these is exciting, and perhaps explains why Myeong Dong is the busiest restaurant in North Strathfield almost every day of the week.