You won’t find Mongolian lamb at Sydney’s only Mongolian restaurant. 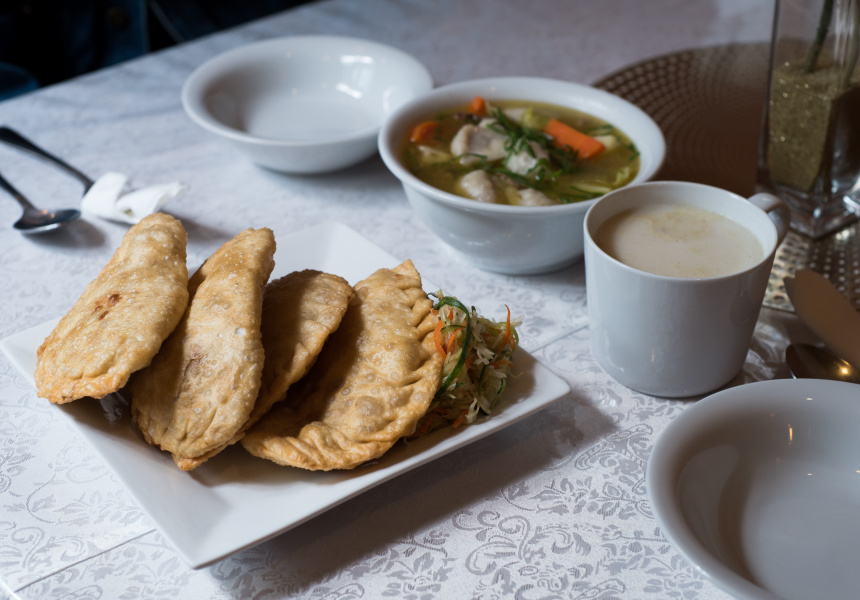 Each week we ask a local community group: “Where do you like to eat?” Sometimes the answer is a restaurant with a huge reputation; institutions such as Ayam Goreng 99, Awafi and Mezzapica. Other weeks it’s a venue mostly unheard of outside of the community – in this case, the Mongolian community.

We’re told there’s only one genuine Mongolian restaurant in Sydney (apparently there are a few “fakes”) and it’s above a Thai restaurant near Arncliffe station. Mongol Lounge has no website, Zomato page, or even street signage. It has a Facebook page, but it’s written almost entirely in Mongolian. In the downstairs Thai restaurant the only clue it’s there is a sign that says, “today’s special: khuitsaa”.

Khuitsaa is a simple beef broth soup with cabbage, green onions, potatoes, carrot, tiny beef meatballs and occasionally noodles. The soup is an example of what Mongolian cuisine is all about: dishes of meat and carbohydrates.

Because a nomadic lifestyle is a big part of Mongolian culture, and the landscape is barren and cold, the cuisine is based around livestock. Almost all meals involve meat, and the use of spices, strong flavours and even vegetables is very limited. “Here, every day it's salad first, but a typical Mongolian family has no salad. Salads are only for special occasions,” says Mogi Gereltuya, co-owner with Zaya Khanchiimaa.

Unlike its southern neighbour China, not a lot of rice is eaten, either. Instead, meals involve dumplings and noodles. khuushuur is the most popular type here, a large, semi-circle-shaped fried dumpling filled with ground beef, chives and garlic. It’s eaten during festival times. They’re a bit like pasties.

The more recognisable dumplings are called buuz, they’re usually filled with mutton (or lamb in Australia), garlic and salt, and boiled in soups with pieces of beef and root vegetables. Mongolia’s national noodle dish is tsuivan, short noodles fried with meat and whatever vegetables are at hand, which here are carrot, shallots and fresh strands of cucumber.

The first thing Gereltuya offers every table is süütei tsai, a thick, soupy tea she says is consumed with every meal. “It’s black tea with milk and butter,” she says. “In Mongolia we wouldn’t use butter, we’d fry a lamb tail in a little bit of flour and make the tea with this in the pot.”

As for Mongolian lamb, the gluggy dark-brown dish on every Chinese restaurant menu, Gereltuya says you’ll never find it here. “No, no, no. Real Mongolians don't eat this. I don't know where that came from.”