Pasta and wine from Piedmont, one of the richest cuisines in Italy. 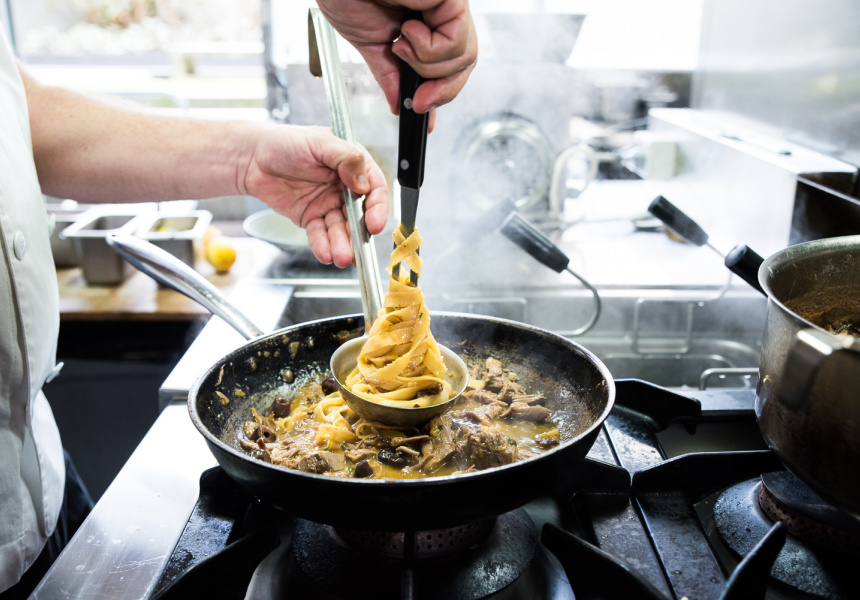 It’s not uncommon for an Italian to claim the food from their region is the best, but when someone from Piedmont says it you should listen. The north-west region is home to more heritage-listed cheeses and wines (the EU has a program to protect the culinary heritage and geographical origin of food and drinks) than anywhere in Italy. It is the home of truffles, gorgonzola, Castelmagno, nebbiolo and the best hazelnuts in the world.

Dario Milano is a Piedmont man. His restaurant, Milano Torino, is one of the only places in Sydney that specialises in the food of the region. He describes the cuisine as a “best of” of Italy. Being close to the mountains and only two hours to the sea it encompasses a lot of the produce and influences from the rest of the country.

The cuisine’s best and worst feature is its richness. Piedmont’s food is deliciously and unavoidably heavy, there’s a lot of butter, egg yolks, game meat, polenta and carbs. Undoubtedly the most famous expression of this is agnolotti dal plin, Piedmont’s version of a stuffed pasta. “They're like ravioli. In Piedmont we make tiny ones; you can fit one in a teaspoon. Plin means ‘pinch’, because you pinch the pasta to close it,” says Milano, who makes all the pastas daily. Traditionally they’re covered in a sauce of butter and sage and stuffed with a mixture of three different roast meats. Here, Milano serves them so, but only in winter. Now that it’s hotter the meat is switched out for a stuffing of spinach and ricotta.

Summer also welcomes fish done carpione style. "Carpione is a marinade of vinegar, wine and herbs, mainly sage. This can be used to preserve different types of food. One of these is fish. In summer I will do it with a trout. It’s cooked, crumbed then put away in the marinade. It’s delicious in summer, fresh and tart.”

Two dishes that rarely leave the menu are the Piedmont classic vitello tonnato (veal simmered in vegetable both then cooled and topped with capers, tuna and mayonnaise) and creamy, soft potato gnocchi with gorgonzola and walnuts.

Like the main courses, dessert is generally a rich, creamy affair. “Piedmont is very famous for chocolate, as well as hazelnuts, they are the best in the world. So our dessert always has hazelnut and chocolate.” Milano is training to be a pastry chef to expand that offering, but until then try his dense, pudding-like chocolate panna cotta.

While you’re dining, you’ll get an interesting insight into how dishes are made. Milano is a professional photographer who often shoots his process live. “Sometimes I will set up a professional shoot and shoot the prep during service. My laptop is connected to a projector so on the wall you'll see what's happening in the kitchen, maybe your dish, before it touches the table.”