Tender fried chicken, shaken noodles Bandung-style and more varieties of cracker than you can try in one visit. 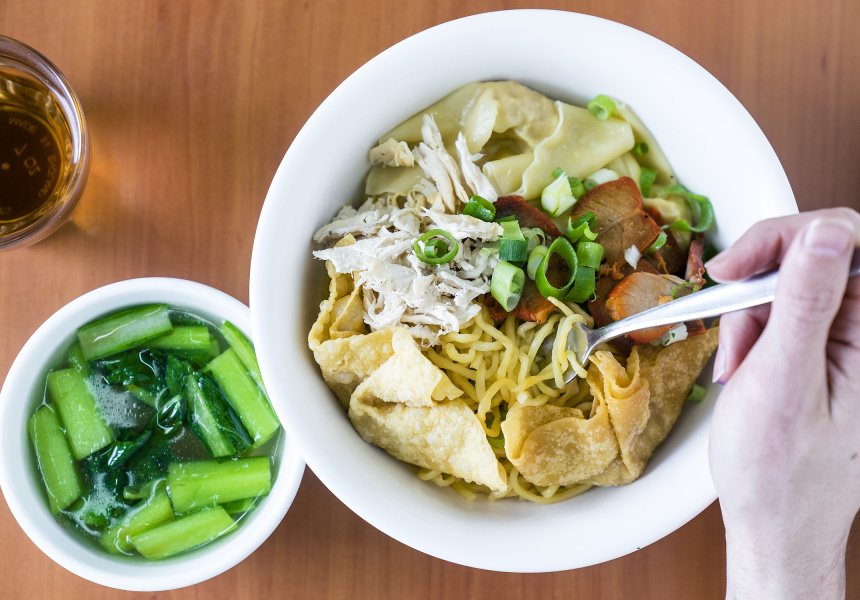 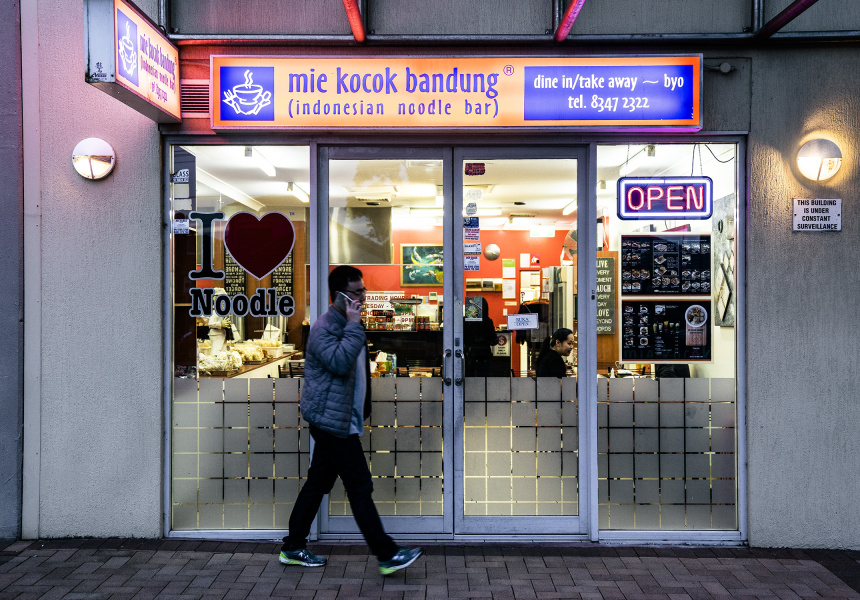 There are crackers everywhere. Crackers on the table, crackers on the wall and crackers on the counter. They’re made of rice, tapioca, prawn, bitternut, peanut, anchovies, rice, taro, cassava and purple sweet potato. Everyone is eating them.

“Bandung people eat everything with crackers,” says Margalena Zakaria. Along with husband Sugianto Halim, she runs and owns Mie Kocok Bandung, one of Sydney’s only Bandung-style Indonesian restaurants. Unusually, the crackers here are mostly imported raw – some look like slithers of wax and others like plastic blocks – and fried on-site. Those that aren’t imported from Indonesia are made by Zakaria’s mum, Susanty The (with help from her father, Zakharia Zakharia).

Zakaria comes from a restaurant family. “All my aunties and uncles have restaurants in Bandung,” she says. Her mum has owned restaurants since Zakaria was born and for a brief period ran a popular spot in Maroubra called Kampoeng Rasa (aside from making crackers, she’s now retired). The’s restaurants were Zakaria’s cooking school. “All my recipes are my mum’s,” she says.

The most popular order at Mie Kocok Bandung is the namesake dish, an aromatic but light beef-broth-based noodle soup with beef balls, tripe and crispy wontons. It literally translates to “shaken noodle” after the technique of cooking the noodles by shaking them in a strainer semi-submerged in boiling water. “It’s Bandung food, you won’t find it in Jakarta or many other places in Indonesia,” says Zakaria.

Most Indonesian restaurants in Sydney serve Javanese or Balinese-style Indonesian food (despite the diversity among Sydney’s Indonesian community), so regionally specific dishes, such as mie kocok or sweet yamien, a noodle dish with minced chicken, crispy wonton skins and kecap manis (sweetened soy), are rare. As is empal (or gepuk in Bandung dialect), a skewer of sweet-and-spicy slow-cooked beef shanks served with sambal and a slice of lemon. or limau (an Indonesian citrus) when it’s in season. “We buy them from a customer who grows them in her home but in winter she has none.”

Many of the other dishes are imports from The’s old restaurant. The’s biggest legacy is her nasi ayam goreng; fried chicken with rice. It’s easy to see why, the meat is so soft it can be shaken off and the lemongrass-and-turmeric-heavy marinade is rich enough to soak through to the centre of the breast.

As for which cracker to have with which dish, it’s a bit of a free-for-all and usually depends on what Zakaria and Halim have in that day. They do recommend the tapioca crackers, a noodle-patty-shaped white cracker that comes from one specialised village in Indonesia, to go with the shaken noodles.