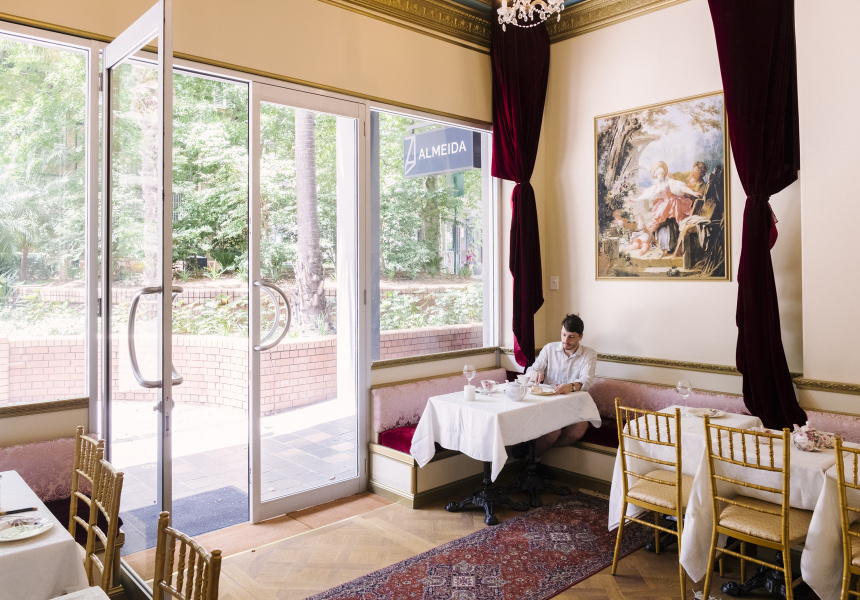 We’ve been looking for a French eatery since this column started. Nothing felt like the right fit because most French eateries are no more respected in the French community than they are in society broadly.

Then we heard about this cheese shop on Springfield Avenue in Potts Point.

It’s quite a sight. Hidden among the dusty bricks, housing commission and elderly palms lies a pocket of French history. Rugs cover the floors and prints of François Boucher paintings adorn the walls and even the ceiling. The carpentry, elaborate and ornate, is in the French Oak style. The tableware is luxe, recalling pre-industrial French aristocracy, and classical French music plays on the stereo. A glass cabinet, the one modern feature, displays some of the best boutique cheeses from France.

Almost all of it was complied, designed and even built over three years by Christian Estebe, a Frenchman who recently quit a high-flying corporate job in Sydney to chase something he felt more culturally and emotionally connected to: cheese. And connected he is. He talks about cheeses and wines from his mother country as if they are not only the greatest examples of their genre on earth, but the greatest things on earth.

He is fastidious in how they should be kept, served and eaten, and everything is done to maintain quality and tradition. “We never wrap, pack or cut our cheese,” he says. “Whenever you cut cheese it degrades the quality. I will only do it to order.”

He gives us some samples, talking about each cheese like a historian gushing over ancient artefacts. One is a farmhouse brie (“Farmhouse means everything has to happen inside the farm. This is very demanding, very impressive,” he says) and another is a brillât-savarin that’s been made the same way since 1820.

There are also washed rinds from Burgundy made with secret recipes that have been awarded national gold medals, a high-altitude hard cheese with floral notes (extremely rare in the cheese world), a comte aged in a basement of a Napoleonic-era fort, and the only Roquefort that retains a farmhouse label. All are handmade.

The only non-French cheeses are the Italian milky varieties, Parmigiano from Italy, and a few Swiss representatives (from the French part, naturally). And of course, there’s a selection of cheese companions: logs of saucisson (French dried sausage), sweet chestnut puree, and cans of foie gras, rillette and confit.

You can pick up Estebe’s goodies to take away or you can sit in and order a cheese platter, with a side of baroque music and wines matched to the region of each cheese. Or if it’s too early to be boozed and you want something sweet, try some Organic Bread Bar canelé and tea (French, of course). “This is not a place where usual things are happening,” says Estebe. “This is a place for the exceptional.”

This article first appeared on Broadsheet on February 6, 2019. Menu items may have changed since publication.