No cutlery, no plates, just a huge platter of Filipino food to share with your friends. For $35 per person it is a preposterous and exciting amount of food. 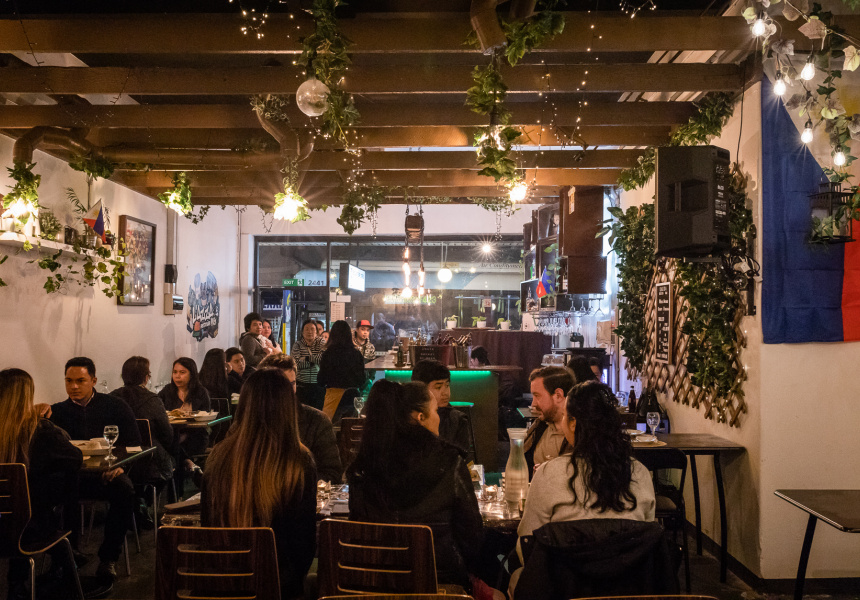 “Excuse me,” says our waitperson, moving our glasses from the middle of the table. A minute later she returns with an enormous bamboo platter stacked high and wide with crisp-skinned pork, charred fish, salted egg, grilled eggplant, egg noodles and a hefty mound of rice. We’re given no cutlery, just a banana leaf to use as a plate.

As soon as it lands hands are everywhere. They tear shards of pork crackling off a hunk of pork knuckle, pull apart the eggplant like it's putty and dig into that rice hill until it looks like a crater. For $35 per person it is a preposterous and exciting amount of food.

It’s called a bilao feast and we’re eating it at Marrickville’s Lazza. Arriane Dizon, one of the owners, along with her husband and Lazza’s chef Arone Dizon, describes it as a miniature boodle fight – a Filipino military tradition where a mass of food is laid out on banana-leaf covered tables and soldiers, staff and sergeants eat with their hands as a big group. It’s a quick and easy way to feed a lot of hungry people, but it’s also a good way to build camaraderie.

It’s become a popular celebration feast too, and a Filipino go-to for a birthday, christening or engagement. “At home we would always be in the back of my house, with my cousins and my parents. We would have a long table with banana leaves and the rice in the middle. That's how I always pictured [my restaurant] – I want this to be a comfort restaurant,” says Arriane.

What you get on your platter depends on you. There are 23 dish options and you choose eight from the regular menu, with rice, fruit, salted egg, tomato and shrimp paste automatically included. Lazza’s big hitters are kare-kare (a peanut-and-oxtail stew), sisig (a sizzling plate of chopped meat dressed with citrus) and crisp pata (deep-fried pork knuckle). “We want [Lazza] to be a bit like a bar. Usually when Filipinos drink beer we have a pulutan, a dish on the side. For Aussies maybe that’s fries but for us it’s sisig and crispy pata.”

For a bilao feast you need to call two days in advance. Forget and you’ll miss one of most theatrical and fun meals of your calendar year. That said, the sheer size of it probably rules it out for most people for, say, a Wednesday night meal. For that Lazza has other Filipino traditions. Oddly, the most famous of them, adobo (a vinegar and garlic-heavy marinade usually applied to chicken) is absent. “Lots of people know adobo and that's why we took it off the menu. If you want it we will cook it for you, but we want to introduce more foods than adobo,” Arriane says.

So, instead you’ll find bulalo (rich beef shanks stewed with bone marrow), ginisang ampalaya (bitter melon fried with egg and shrimp paste), regional specialities such as Bicol Express (a stew made with coconut, shrimp paste, pork and chilli that comes from Arriane’s home region) and various weekly specials. “We want to promote the food where we grew up, the comfort foods,” says Arriane. “We're very proud lots of non-Filipinos like it [and] they are appreciating Filipino food.”

This article first appeared on Broadsheet on August 27, 2019. Menu items may have changed since publication.