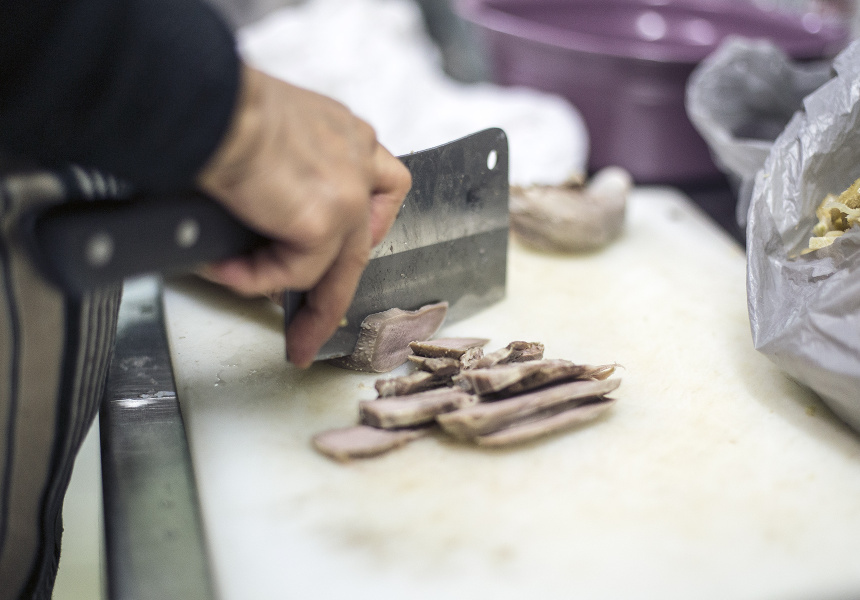 Bill Ma has been cooking the food of his people, the Hui, for 24 years. Lao Hui Min, his first Sydney restaurant opened a month ago, would be completely invisible if it wasn’t for its growing reputation among Burwood’s Chinese population. It’s basic and unadorned, it doesn’t have a website, there is no phone and it’s unpredictably either loudly bustling, or completely quiet.

It’s particularly well regarded amongst Sydney’s Xinjiangese population. Xinjiang, China’s most north-western province, is where a large portion of the Islamic Hui people live. The chefs at Lao Hui Min follow strict halal law. Their cuisine is heavily based on meat and wheat-based carbohydrates and almost every dish has either one or all of five ingredients: lamb, bread, noodles, capsicum and cumin. Lao Hui Min’s Xinjiang-style noodles is a classic example. The chewy, soft noodles are stir-fried in a savoury tomato reduction with lamb, shallots, onion and capsicum. The noodles, made with a simple mix of water, salt and wheat flour are prepared daily and hand stretched to order. It’s simple, satisfying and an excellent representative of a humble and hearty cuisine.

Another of the most common dishes from the Xinjiang area is the lamb kebab. Lao Hui Min’s is cooked traditionally on a skewer over charcoals with a coarse dusting of cumin, pepper and salt. Traditionally, they should be eaten with the skewer horizontal to the face, using your teeth to slide the meat off the skewer and into your mouth. During religious celebrations, it’s common for the Hui people to slaughter and share an entire roast lamb, and Lao Hui Min offers exactly that (minus the ritual slaughtering) for $398. It sounds expensive, but it feeds 20 people, so ends up being less than $20 a head.

Like most Chinese cuisines, Xinjiang shares influences with other regions from China. Dapanji is probably the most popular restaurant dish in Xinjiang. An urban myth says the dish originated from a Sichuan migrant who lived in the north Xinjiang city of Shawan. The dish, literally translated to “big plate chicken”, consists of potato, capsicum, tomato, garlic, Sichuan pepper and chicken, all stir-fried and then stewed in a giant bowl or wok. Lao Hui Min’s version is enormous and comes with thin, wide-belt noodles and moist chicken pieces. For a true Xinjiang experience, supersize your order and get the dapanji with sides of crispy pancakes and thin-skinned dumplings filled with mutton, cumin and shallots.

Ma would like to make naan, the most typical of the region's many flatbread varieties made with wheat flour, sesame, butter and milk, but he doesn't have the resources in his small kitchen yet. You’ll see it on the menu, though – perhaps an exercise in writing your goals down to help make them come true.