Some of the city’s best street food, served until 4am. 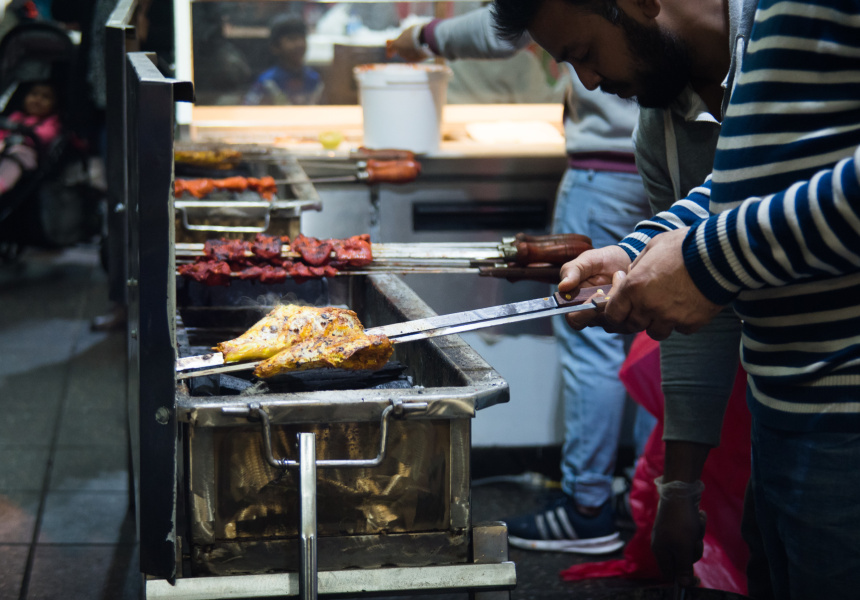 It’s 1am on Sunday morning. You’re walking down a suburban street, it’s dark and quiet. You turn a corner. Splat! A man with a bushy moustache and a flat-topped skullcap throws a blob of shiny dough onto a steel cart and yells “murtabak!”. Suddenly 10 people brush past you, you hear the muddled yells of street vendors and smell smouldering charcoals, smoked meat and the unmistakable aroma of fresh bread. There’s a line of improvised stalls on both sides of the street, with crowds eating, haggling and drinking tea.

Serving food on the street late at night – it sounds very un-Sydney. Looking at the images in this article, you might assume they depict another country. But there aren’t many other places it could be; Burmese, Palestinian, Lebanese, Pakistani, Malaysian, Syrian, Indonesian and Bangladeshi communities coexist here happily.

The reason they’re all here in Lakemba is because it’s the holy month of Ramadan. Most have been fasting since sunrise and are here at the night markets to enjoy iftar, a communal feast to break the fast. In many cultures it’s traditional to start by eating three dates, because that’s what Muhammad did. After that, it’s whatever you fancy.

Many members of the South East Asian contingent line up at the murtabak (iron-grilled roti stuffed with curried meat, egg, coriander and onion) stalls. One at the north end, run by Burmese-Australians, also serves vegetable samosas and baya kyaw (crunchy split-pea fritters).

At the opposite end you’ll find Haji Biryani’s stall serving mughlai paratha, a buttery, doughy murtabak-like dish from south Asia. They’re also stirring crimson chicken curries, frying curry-rubbed kingfish and attending to a sizzling mass of kata-kat (a spiced offal stir-fry that gets its name from the sound of the chef’s blades hitting the iron as they chop liver and brain). From there you’ll smell wafts of smoke and flaming charcoals from a Pakistani stall grilling yoghurt-marinated chicken skewers and roasting puffy discs of naan in a tandoor.

The centre of the market is the loudest point. On the western side, the attraction is Broadster Chicken’s camel burger, kebab and fruit juice stand; and on the eastern side it’s a trio of stalls dishing out Lebanese, Palestinian and Syrian cuisine – things like sahlab (a drink made with milk, cinnamon and rosewater), kaak (a baked sesame bun sometimes stuffed with soft cheese and grilled) and, perhaps the most popular night market snack, knafeh (a syrupy Middle Eastern soft-cheese pastry).

Make sure you go late. Although the stalls start assembling at sunset, they run all night. A lot of the stall owners will tell you the real action doesn’t happen until 10 or 11pm, or if it’s a Friday or Saturday, 1 or 2am.

Lakemba’s night markets run throughout Ramadan (until June 24) from around 5.30pm to 4am. You’ll find them on the station end of Haldon Street, Lakemba.